The world faces climate-related risks with “sweeping and severe” consequences that affect people today and will continue in future generations, a new report from the United Nations released Wednesday said.

“The world’s ocean and cryosphere have been ‘taking the heat’ from climate change for decades, and consequences for nature and humanity are sweeping and severe,” Ko Barrett, vice-chair of the Intergovernmental Panel on Climate Change (IPCC) said in a statement. “The rapid changes to the ocean and the frozen parts of our planet are forcing people from coastal cities to remote Arctic communities to fundamentally alter their ways of life."

More than 100 authors prepared the 1,170-page report, titled “The Ocean Cryosphere in a Climate Change.” Nearly 7,000 publications were referenced in the report, published from the IPCC, the UN’s “body for assessing the science related to climate change” that was established in 1988 on Wednesday.

The report found the world’s oceans could rise faster than projections previously made for 2100 had estimated.

Oceans could still rise 30-60 centimeters, or around 11.8-23.6 inches, by 2100 if global warming is reduced to “well below” 2 degrees Celsius (3.6 degrees Fahrenheit) as greenhouse gas emissions are reduced drastically. However, if emissions continue to increase, global sea levels could rise from around 60-110 centimeters, or roughly 23.6-43.3 inches.

“The open sea, the Arctic, the Antarctic and the high mountains may seem far away to many people,” Hoesung Lee, Chair of the IPCC said in a statement. “But we depend on them and are influenced by them directly and indirectly in many ways — for weather and climate, for food and water, for energy, trade, transport, recreation and tourism, for health and wellbeing, for culture and identity.”

More than 90% of excess heat in the climate is taken in by the ocean, according to a statement on the report. Within the next 80 years, if global warming is held to 2 degrees Celsius, it could absorb between two to four times that amount of heat it did compared to 1970. However, if emissions continue, this could be two to five times higher.

Rising sea levels will affect many island communities with risk of floods — although the overall affects are hard to assess and predict.

Oceans will also continue to acidify as the they absorb carbon dioxide emissions produced by humans, the report warned. Since the 1980s, oceans have taken in around 20% to 30% of those emissions. The oceans have also absorbed “more than 90% of the excess heat in the climate system,” the report said.

“Since the mid-20th century, the shrinking cryosphere in the Arctic and high-mountain areas has led to predominantly negative impacts on food security, water resources, water quality, livelihoods, health and well-being, infrastructure, transportation, tourism and recreation, as well as culture of human societies, particularly for Indigenous peoples,” the report said.

Millions of people worldwide — including those living downstream from mountains — may be affected by increasing global temperatures.

Avalanches, floods, landslides and rockfalls may increase, posing a hazard as glaciers, ice and snow decline.

The report called for urgent action to reduce greenhouse gas emissions, preserve the Earth’s resources and protect and restore ecosystems. Further study is needed to understand the full effects the world may face.

"If we reduce emissions sharply, consequences for people and their livelihoods will still be challenging, but potentially more manageable for those who are most vulnerable,” Lee said. “We increase our ability to build resilience and there will be more benefits for sustainable development.” 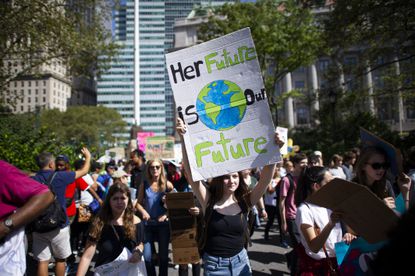 The report said if action is taken, people will be able to more easily adapt to the changes in their communities that result from climate change.

“Reducing greenhouse gas emissions is the main action to limit global warming to acceptable levels and reduce the occurrence of extreme events and abrupt changes. However, in addition to mitigation, a variety of measures and risk management strategies supports adaptation to future risks,” the report said.