The heartbroken family of a 14-year-old boy killed by a dump truck while riding his bike through Queens is demanding answers on exactly how the teen died.

Mario was cycling alongside the Mack dump truck on Borden Ave. under the Pulaski Bridge in an industrial stretch of Long Island City when the driver made a right turn onto 11th St. about 1:55 p.m. Saturday, cops said.

The boy fell under the truck’s massive rear tires and died at the scene.

The 33-year-old driver for Limited Interior Group, a private sanitation company headquartered nearby, remained at the scene and has not been charged. A call to the company was not immediately returned Sunday.

The family wants to fully understand how the crash happened and if the driver, who was in tears at the scene, is at fault.

“We don’t want irresponsible drivers out there,” said Elias Astudillo, 53, a cousin of Mario’s mother. "It could happen to another kid. We want them to find what happened. We want the truth and we want justice.” Mario’s grieving parents wanted to see his body but were made to identify him at the city morgue through a photograph.

“I don’t believe it," said Mario Valenzuela Sr., the boy’s father. “I see the picture of the body but I don’t see the (actual) body. (Officials) say the body’s completely destroyed.”

Mario was repeating eighth grade this year, but excelling on his second try, his family said.

“He said it was only nerds in his classroom," his mother said, moving from tears to laughter at the memory. "I told him that I didn’t want a nerd, that I want a good person, a good boy, a good man. 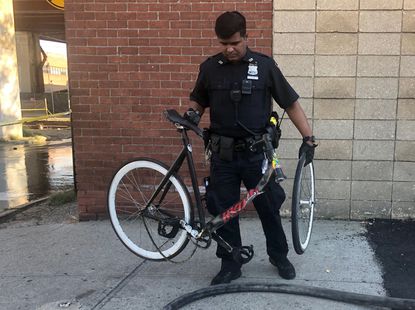 “To be a good person, that’s all that I wanted for him,” she added. “The best always for him.”

The boy’s family said he was likely en route to or from Gantry Plaza State Park on the East River, where he loved to hang out. He was with two pals when he was killed.

“I couldn’t even talk to the other two boys because they were in shock," Mario’s mom said.

He was the 21st cyclist killed in the city so far this year, prompting an outcry from cycling advocates. Ten bicyclists were killed in all of 2018.

“When will (the city Transportation Department) start treating this like the emergency it is?” local Councilmember Jimmy Van Bramer tweeted in the aftermath of Mario’s death. “The 21st cyclist killed this year & the 2nd in LIC— this demands radical action!”

“Absolutely awful,” state Sen. Mike Gianaris, who represents the area, tweeted. “Every cyclist death is tragic and preventable. We’ve had far too many this year and it’s clear we must do a lot more to keep cyclists safe.”

Ellen McDermott, deputy director of advocacy group Transportation Alternatives, blamed “large trucks” for causing “more than half of the cyclist deaths this year,” she said in a statement.

“Mario did not have to die. Like so many of the 21 other cyclists dead this year, Mario was killed on a street with no protected bike lane. Without a network of protected bike lanes New York cyclists will continue to suffer preventable deaths, McDermott said.