They’re movin’ on up — to a rent strike.

Renovations on Park Lane Towers, the terrace-ringed Upper East Side high-rise that symbolized luxury living for George and Weezy on “The Jeffersons” has current real-life tenants so outraged they’re planning to halt rent payments starting Tuesday.

Their beef? Dangerous lead and silica dust in the air, work that’s not up to code and residents who are ailing as a result, Noreen Shevlin, co-chair of the tenants association and a 25-year resident of the E. 85th St. building at Third Ave, told the Daily News.

Tenants with outdoor spaces have found their terrace doors locked from the outside, barring them from cleaning dust that’s been finding its way into their apartments. To make matters worse, residents say air conditioners haven’t been covered, allowing dust and grit to make its way inside.

“I was angry when they took my terrace, but then I became aware of the debris coming into the building,” said Shevlin, a film and video producer. “The terrace is the least of it.

“They’re not protecting the tenants. They’re not taping up the windows. The second floor looks like Desert Storm," she added. 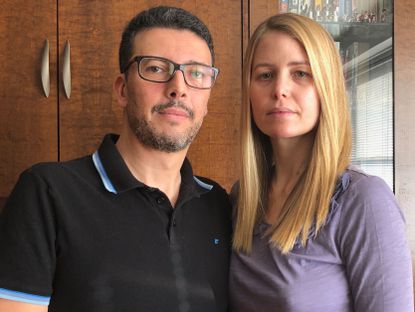 At least one resident says the renovations, which began about two years ago on the 35-story building, have affected her health.

Simone Teodoro, 39, discovered mysterious nodules on her lungs after a visit to her pulmonologist for asthma. Multiple CAT scans and biopsies since June have shown a growing number of large masses in her lungs, as well as fluid. She had three pieces of her lower left lung removed in September and was given a general diagnosis of non-infectious pneumonia.

Teodoro said she and her husband sealed their windows with plastic and pulled up the rugs. Two humidifiers and air filters run around the clock.

After her doctors saw environmental reports ordered by the tenant group showing the presence of silica and lead in the dust, they recommended she leave the apartment for a month to see if her condition improved.

“The scary thing is that if I hadn’t had the asthma I wouldn’t have known,” said Teodoro, a nurse practitioner. “I would have lost lung function.”

Her husband Mauricio Consulo, 48, said the conditions all of it combined has forced them from their home.

?We are going to move out,” he said. “We’ll stay with family in Pennsylvania. I can work remotely, but she’ll have to take a leave of absence.”

“This is a gray grit that just hangs in the air and is everywhere — and that’s with the windows closed,” she said.

A strong chemical smell overtook her apartment when work crews repointed the facade near her apartment, she said.

“My husband and I had sore throats for days after that,” she said. “There are babies here who are going to breathe this in. It’s just absolutely horrendous.”

The rent strike could serve as a test of new state laws enacted earlier this year to protect tenants who stand up for themselves from being blacklisted by landlords.

“The blacklist was a dagger in the heart of the tenants’ most effective weapon,” said the group’s lawyer, Jack Lester. “[A rent strike] is a tenant’s only leverage.”

One- to three-bedroom apartments in the building, a mix of rent-stabilized and market rate units, range from about $2,000 to $5,000 a month.

The company that manages the buildings, Charles Greenthal Management, did not respond to numerous messages.

“Landlords have a duty to provide tenants with a safe and livable space,” said Assemblyman Dan Quart, who’s fielded residents’ complaints. “When a landlord is not fulfilling their duties and maintaining the building, it’s incredibly important tenants know their rights.”