Upcoming Broadway season has something for every theatergoing taste, here’s preview of 10 hot shows

Want some Broadway in your life this fall? Saving up your pennies for a night out on the Main Stem? We got some hot new shows for your consideration.

Our curated 10-pack of picks is a varied slate: freestyle rap, presidential machinations (no, not that one), gay history, Alanis Morissette, middle-age dudes, Marisa Tomei, sexual fantasies, a wise English professor, a Brit mind-bender and decades worth of Tina Turner hits.

Heard of Lin-Manuel Miranda? Want to see him again on Broadway? Well, you might if you go to “Freestyle Love Supreme,” since the “Hamilton” creator is part of the rotating cast of performers in this hip-hop comedy show he also co-produced.

In essence, the unscripted show is like improv, except that the on-stage riffs that flow from audience suggestions are all performed as freestyle rap performances — maybe a fragment, maybe a full-blown number. Since the material is different each night, the theory here is that it makes sense to vary the performers.

The downside is that you don’t know in advance who you are going to see. But the upside is that by freeing star names from the eight-shows-a-week grind, it makes it possible to attract highly skilled and famed folk who just want the chance to showcase their chops in a simpatico environment, as forged by “Hamilton” director Thomas Kail. Daveed Diggs, Wayne Brady and Christopher Jackson are also on the likely list.

Night owls should note that some of the shows don’t start till 10 p.m. And note to cellphone addicts: They’re gonna make you lock your phone away in a pouch! Previews began Sept. 13; opens Oct. 2 through Jan. 5, 2020 at the Booth Theatre, 222 W. 45th St. www.freestylelovesupreme.com

An epic drama with 17 actors playing more than 50 characters, “The Great Society” is the latest presidential opus from Pulitzer Prize-winning scribe Robert Schenkkan, the writer of “All the Way,” a play about the early life of President Lyndon Johnson.

Under the direction of Bill Rauch, this sequel of sorts takes on the three most crucial years of Johnson’s life, when he was chief executive of a brief but tumultuous American era (aren’t they all?) that encompassed the Civil Rights Movement, the Vietnam War and, just maybe, the growth of the most formidable and influential democracy in the world.

The source is E.M. Foster’s novel “Howard’s End,” the story of a clash between shallow industrialists and a pair of sensual, free-thinking sisters. But the setting for this high-profile import from London is the modern-day gay community of New York City.

“The Inheritance” is a two-part, seven-hour epic, penned by the American writer Matthew Lopez and directed by Stephen Daldry (“Billy Elliot”). British critics (and the Olivier Awards) loved it, deeming it one of the most important works of our young century. And, of course, comparisons with Tony Kushner’s groundbreaking epic “Angels in America” were everywhere.

As with that magnum opus, the community in this newer work lives with the legacy of the AIDS atrocity, albeit in more ghostly form. But as with “Angels,” the message of the piece is of survival: We must live in the present, it says, while honoring the sacrifices of those who came before. Previews begin Sept. 27, opens Nov. 17 at the Ethel Barrymore Theatre, 243 W. 47th ST. www.theinheritanceplay.com

Alanis Morissette’s famously furious and fearless 1995 album was not only a milestone of feminist alt-rock, but unflinchingly personal in its content — the tracks express passion, fear, desire and raw rage. Ahead of its time, you might say.

A quarter century on, screenwriter Diablo Cody (“Juno”) turns “Jagged Little Pill” into a jukebox musical, creating a fictional Connecticut family with a clever façade but deep internal problems. The show, which tried out in Boston in 2018, includes the entire titular album, plus a bunch of other Morissette compositions, as arranged by Tom Kitt.

Middle-aged white men aren’t exactly having a moment — unless you mean trying to avoid errors in judgement leading to their own cancellation. But Tracy Letts, a member of that demographic, has bucked the trend and penned a sympathetic black comedy about a lovable loser (a former print journalist, no less) who has left Chicago for sunny Southern California. Yet more hapless in the sun, this divorced prairie dude tries to woo women in bars without getting slapped in the face.

In its best moments, “Linda Vista,” which is often very funny, is a fascinating portrait of a man sleeping as the world got woke, but still maybe deserving of his chance at happiness before his mind and body finally fall apart. Previews begin Sept. 19; opens Oct. 10 at Second Stage’s Helen Hayes Theater, 240 W. 44th St. www.2st.com

Ah, Serafina Delle Rose, Tennessee Williams’ grieving Italian widow! A seamstress in a small Mississippi town, Serafina suffers the loss of a louse of a husband, enjoys the ministrations of a hot new lover, and takes out much of her pain and confusion on her own teenage daughter, Rosa.

The star of Trip Culman’s production, which I saw in Williamstown in the summer of 2016, is Oscar-winning actress Marisa Tomei (“My Cousin Vinny”). At Williamstown, Tomei played Rosa, all rebellion and annoyance at her messed-up mom. Her performance in this top-drawer summer theater in the Berkshires was not only far from any stereotypical conception of the role, but rivetingly sensual.

The 54-year-old Tomei has now graduated to Serafina, and this is a counter-intuitive performance likely to be much discussed on Broadway this fall. Previews begin Sept. 19; opens Oct. 15 at American Airlines Theatre, 227 W. 42nd St. www.roundabouttheatre.org

Many shows arriving on Broadway sell tickets by claiming to be edgy, risky or otherwise transformative of this free market-driven collection of theaters and shows. But “Slave Play,” Jeremy O. Harris’s black comedy, is a whole other thing. This incontrovertibly dangerous work, which riveted many of us when it debuted at New York Theatre Workshop last season, has provoked a singularly divisive response from those who have experienced its themes of sexual fantasies seen through a prism of racial subjugation.

The playwright, who quickly has become famous, is himself an outspoken personality, a writer and walking fashion statement who is thoroughly disinclined to varnish anything with the veneer of acceptability. Most people have focused on the taboo sex on the stage, and the play’s controversial exploration of what it appears to deem the sexual fantasies of some African Americans.

But Harris has a much broader pallet than most realize. Written with brilliant self-protection, “Slave Play” is about American culture and a reminder that diversity, equity and inclusion cannot ignore the bedroom, where our primal selves are most exposed. Go at your own risk, whomever you are. In previews, opens Oct. 6 at the Golden Theatre, 252 W. 45th St. www.slaveplaybroadway.com

With all the noise on Broadway this fall, there is reason to worry that this small, two-character play by Adam Rapp will get squelched. But for those of us who caught David Cromer’s production — and Mary-Louise Parker’s astonishing performance — at the Williamstown Theatre Festival last summer, there is reason for everyone to shut up and listen.

The play is all about a 53-year-old Yale University writing professor who finds herself facing cancer, and, like a lot of folk in their fifties, finds herself able to see the absurd shallowness of the undergraduates she has to teach but also the deathbed horror that surely lies ahead for herself. So why not get close to a student, brimming with young life and filled with the annoyance factor of every over-confident Millennial?

This will be a rare Broadway foray for Rapp, a David Foster Wallace-like playwright capable of inestimably dense and fierce writing, especially about our inevitable exit from this sorry world, and the first return there for the simpatico Cromer after his hit production of “The Band’s Visit.” In previews; opens Oct. 17 at Studio 54, 254 W. 54th St. www.soundinsidebroadway.com

Hollywood director J.J. Abrams is the lead producer of this unusual Broadway attraction — a showcase for the British mentalist, illusionist, magician and self-confessed cheat Derren Brown, a household name across the pond but mostly unknown to American audiences.

Excepting, that is, American magicians, since the 48-year-old Brown is perhaps the most highly-regarded deceiver of his generation. In “Secret,” you can expect your mind to be read, maybe, and definitely some weighty probing of how illusions always have been rooted in the human psychology, and our painful neediness and insecurity.

Brown has always said that he possesses no supernatural powers whatsoever — he merely misdirects the mind and misleads the easily suggestible. Sure. I’m impervious. What about you? In previews; opens Sept. 15 at Cort Theatre, 138 W. 48th St. www.derrenbrownsecret.com

The 79-year-old R&B star, born Anna Mae Bullock in Nutbush, Tenn., has been famous since the Ike & Tina Turner Revue recorded the million-selling “A Fool in Love” in 1960. By 1969, they were opening for the Rolling Stones before becoming megastars in their own right. But as all Tina Turner fans know, the marriage, which ended in 1978, involved her suffering abuse at the hands of a cocaine addict. And by the 1980s, she had reinvented herself as a self-empowered solo musical superstar and movie actress. 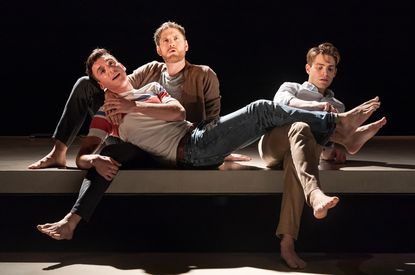 “Tina,” the jukebox musical about her life and work penned by Katori Hall, Frank Ketelaar and Kees Prins, has already been seen in Hamburg and London and will arrive on Broadway with the widely-acclaimed London star Adrienne Warren in the title role.

The show is directed by Phyllida Lloyd, who made a buck or two on “Mamma Mia” but told London journalists she had no intention of turning the tenacious Turner’s life into a Disney movie. It’s a gritty journey through 40 years of the singer’s life and times — including the Ike years that forced a resilient musical icon into the woman she became. Previews begin Oct. 12; opens Nov. 7 at the Lunt-Fontanne Theatre, 205 W. 46th St. www.Tinaonbroadway.com