BEIRUT ((DailyNews)) — When Afraa Hashem thinks back about living through the siege of Aleppo, she remembers how inventive everyone was.

In late 2016, Syrian government forces had sealed off Aleppo’s rebel-held eastern half, with 270,000 people inside, and for months they and Russian warplanes blasted it to rubble. Food was scarce. Hashem’s family, like others, was largely surviving off one meal a day.

One day, her eldest son Wisam, 11 at the time, asked out of nowhere: “Mommy, can we have fish?”

Her three kids didn’t even really like fish. But when you have almost nothing, you miss even things you don’t like, she recalled.

Unwilling to cave in to despair, Hashem fried up moldy bread, found some coriander, garlic and Aleppo’s famed red pepper flakes and told them it was tilapia. Together, they all pretended it was fish — the kids even said they could taste it.

“It wasn’t just me, but all the women in Aleppo were doing these inventions to feed their children,” she said.

Hashem and other Aleppo survivors on Tuesday mark the 11th anniversary of Syria’s revolution-turned-civil war. This year, many of them are not just reflecting on their own fates, they are watching in shock as Ukrainians face familiar horrors: bombardment, brutal siege and flight from their homes.

In Syria’s war, Russia helped President Bashar Assad’s government gain the upper hand with a ruthless strategy. One by one, they locked sieges around opposition-held areas, bombarding and starving them until the population’s ability to hold out collapsed.

The siege of Aleppo was among the most brutal. Aleppo was Syria’s most populous city, famed for its unique cuisine of elaborate dishes and its millennia-old Old City.

When the war began, its eastern districts fought off the government for four years, brimming with revolutionary fervor. But nearly six months of siege reduced much of the east to empty rubble, its population dispersed or dead.

In Ukraine, a similar siege has been underway for nearly two weeks on the port city of Mariupol, where tens of thousands are scrounging for food and shelter under Russian bombardment. The fear is that Russian President Vladimir Putin will expand a Syria-style siege strategy across Ukraine.

Now in London with her husband and children, Hashem said she stood in solidarity with Ukraine from the first day of Russia’s invasion.

“A lot of people ask if I am mad that the world sympathizes more with Ukraine than it did with Syria. I tell them I don’t care if people sympathize more. I care that they are victims,” she said.

In a corner of Syria still outside government control, another Aleppo survivor, Abdulkafi Alhamdo, is also trying to connect with Ukraine.

He lives in opposition-held Idlib province and works as a literature professor in the nearby Turkish-controlled town of Azaz.

In class, “I am always linking Big Brother in George Orwell’s ‘1984’ novel to Putin, both in Syria and now in Ukraine,” he said.

Alhamdo printed two Ukrainian flags to wave alongside the Syrian revolution flags at a local protest in Idlib marking the anniversary this week.

When Syria’s conflict began in 2011, Hashem worked as a school principal and activist. Her hopes for change in Syria rose with opposition gains, including its capture of Aleppo’s eastern half from the government. Hashem worked with the local council running the city and helped organize protests.

Over the next years, Russian and government warplanes increasingly bombed east Aleppo as they battled rebel forces in the countryside. Hashem moved her school into a basement and turned the darkened rooms into classrooms and shelters. She started a theater there, writing plays for the students to perform.

With fighting growing worse, the ordinary life she once had grew more remote. In the mornings she would pass by the hill separating her part of east Aleppo from government-held west Aleppo.

It was as impassable as the Berlin Wall, she recalled. If you got too close, snipers would shoot you. But she wanted to hear cars, any sound from the other side that would bring the memory of friends and relatives who lived there.

“I would always wonder, ‘What is life like in that second universe?’”

Her universe tumbled into complete hell when siege was imposed on the east in July 2016.

East Aleppo was sealed off, with hardly any supplies getting in. Russian and government bombardment smashed everything, including hospitals and schools. Residential blocks were left in ruins.

Early on, one of Hashem’s students was killed. She stopped the school theater. The district’s few gardens became cemeteries. Medicines ran out. The sound of explosions was constant. Hashem’s apartment building was bombed multiple times, before and during the siege, and they moved often.

With no electricity and limited fuel, residents turned to “plastic gasoline,” extracting fuel from plastic bottles and containers. It was bad for the generators and gave off a toxic smell. But it helped generate enough electricity for people to charge car batteries, mobile phones and small LED lights.

With no gas for cooking, families collected furniture and scraps of wood to burn from the ever-growing number of bombed-out buildings.

Prices spiraled. There were no fruits and few vegetables. Flour was almost impossible to come by, so Hashem and other families made bread by grinding white beans.

As winter cold set in, scrap wood was needed for warmth, too. Her kids missed sahleb, a sweet, warm comfort-drink that’s a wintertime favorite across the Middle East. It’s made from the tubers of an orchid, impossible to find during the siege.

So Hesham again improvised. She dipped into her precious reserve of flour, boiled it with water and sugar, “and that was like you are drinking sahleb but in a different way.”

Soon after, in late December 2016, she was among tens of thousands of residents who agreed to leave under an evacuation deal. She went to opposition-held northwest Syria, then into Turkey.

On her first night in an apartment in the Turkish city of Gaziantep, she watched the washing machine spinning for the first time in years – and cried.

Hesham took her kids to a mall, to the “promised land” of the food court. “We bought all kinds of food that we’d dreamed of eating. Pizza, hamburgers, chicken nuggets, fish and chips. All of that.”

Today, a Syrian regime soldier lives in her old home, relatives still in the city tell her, reflecting a government trend to confiscate properties after battles.

Iman Khaled Aboud, a 40-year-old widow, also left Aleppo in the same evacuation on a foggy December day with snow and bitter cold, similar to temperatures in Ukraine now.

She described seeing Russian troops for the first time as the evacuation buses passed through checkpoints — after months of being at the receiving end of Russian strikes. Her son and her husband were both killed in a Russian strike, she said. Under bombardment, she and her family had to move 15 times during the siege.

Aboud said she hopes Ukrainians don’t have to go through what she did. But, she said, “I would advise them to stock up on food.”

In February 2020, Hashem was invited to attend the British Academy Film Awards for her participation in the award-winning movie, “For Sama,” which follows the birth of a child during Aleppo’s siege and prominently features Hashem’s family. In Britain, she was able to claim asylum.

For the anniversary of the war, Hashem plans to attend a protest in London against the Syrian government, where they will also raise banners against Russia’s invasion of Ukraine,

“I want to show the world that our disaster and experience might be transferred to another country.” 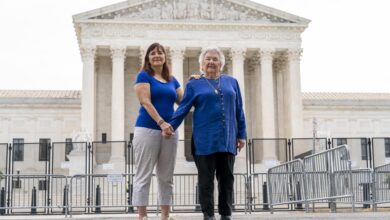 Photos of protests outside Supreme Court ahead of abortion decision 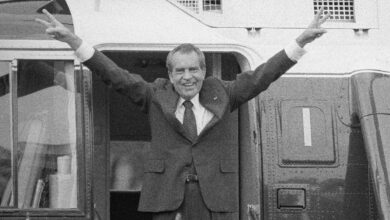 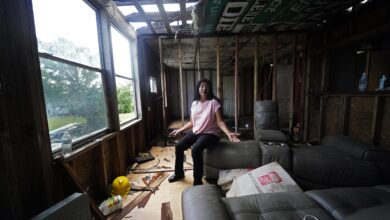 In Louisiana, Native Americans struggle to recover from Ida 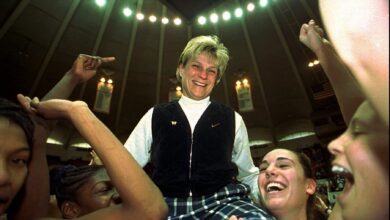 1 week ago
Check Also
Close
Facebook Twitter WhatsApp Telegram Viber
Back to top button
Close
Popular Posts
We use cookies on our website to give you the most relevant experience by remembering your preferences and repeat visits. By clicking “Accept”, you consent to the use of ALL the cookies.
Cookie settingsACCEPT
Manage consent