Lashing out at Joe Biden and the media, President Trump said Monday that his Democratic rival “would get the electric chair" over his role in the Ukraine whistleblower scandal if he were a Republican.

Trump insisted he did nothing wrong, though he admitted that he talked to the president of Ukraine about corruption and the former vice president.

Democrats have speculated, based on information leaking out about a whistleblower report, that the commander-in-chief pressured Ukraine President Volodymyr Zelensky to gin up a smear campaign against Biden and threatened to withhold foreign aid when he refused.

During a news conference with reporters outside the United Nations ahead of his General Assembly speech Tuesday, Trump portrayed the ex-vice president as the real culprit for his actions while in office four years ago.

"If a Republican ever said what Joe Biden said, they’d be getting the electric chair,” Trump told reporters.

Trump and his Republican allies claim Biden acted improperly in 2015 when he pressed Zelensky’s predecessor to dismiss a prosecutor who was widely derided as being corrupt. The prosecutor, among other things, was investigating a gas firm whose board of directors included Biden’s son Hunter.

“Joe Biden and his son are corrupt,” Trump added, without elaborating.

Trump suggested he might release a transcript of his July 25 call with Zelensky as the scandal continued to swirl over a whistleblower’s claim that Trump improperly sought to enlist Zelensky’s help to tar Biden.

Democratic leaders are pressing demands for more information about the controversial complaint, which the White House is trying to keep under wraps despite a law that says it must be handed over to Congress.

The Democratic chairmen of three congressional committees whipped off a letter demanding that Secretary of State Mike Pompeo immediately pony up documents related to the scandal or face another blizzard of subpoenas.

"The president and his personal attorney now appear to be openly engaging in ... abuse of power involving the Ukrainian government ahead of the 2020 election,” wrote Reps. Eliot Engel (D-Bronx, Westchester), Elijah Cummings (D-Md.) and Adam Schiff (D-Calif.). 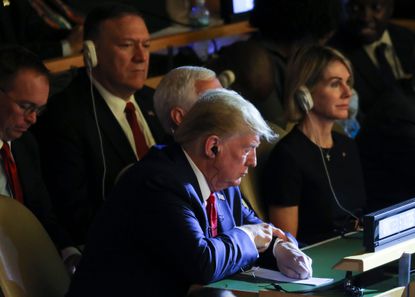 Meanwhile, moderate Democrats are whispering greater support for impeachment after what many are calling Trump’s most brazen abuse of power so far.

House Speaker Nancy Pelosi (D-Calif.) has so far held off on impeachment out of fear that voters may see it as political posturing, especially so close to the 2020 elections.

That could change if the White House continues to stonewall on the whistleblower complaint or if more damaging information about the incident emerges.

Her biggest bulwark has been moderate Democrats, especially freshmen lawmakers from swing districts.

Rep. Max Rose (D-S.I., Brooklyn), who won election last year, recently declared that he opposes impeachment. A spokesman did not return calls for comment about the Ukraine whistleblower.

“The president’s pattern of behavior is corrupt at best, treasonous at worst,” said Phillips, a moderate who flipped a GOP-held seat in suburban Minneapolis in 2018.

I came to Congress on a mission to clean up corruption and restore America's trust in our government. The President's pattern of behavior is corrupt at best, treasonous at worst, and puts our rule of law at risk. Here's my full statement: https://t.co/3rZidUMisL pic.twitter.com/wFtaj7KR2V

Republican lawmakers have so far remained mostly quiet about the scandal.

Trump sought to portray an air of confidence as he met with foreign leaders and prepared to address the UN General Assembly. He will meet with Zelensky on Wednesday, a meeting that would ordinarily not draw much attention, but will now be keenly watched.

Trump seemed to admit mentioning the Bidens to Zelensky, but claimed that he was merely raising the issue of corruption in the July 25 call.

“It’s very important to talk about corruption. If you don’t talk about corruption, why would you give money to a country you think is corrupt?” Trump told reporters. “We had a perfect phone call with the president of Ukraine,” he said. “It’s just a Democrat witch hunt, here we go again.”

I came to Congress on a mission to clean up corruption and restore America's trust in our government. The President's pattern of behavior is corrupt at best, treasonous at worst, and puts our rule of law at risk. Here's my full statement: https://t.co/3rZidUMisL pic.twitter.com/wFtaj7KR2V