‘The Good Place’ goes out on its own terms

The Good Place is exactly what you want it to be. It’s unlimited shrimp or an endless library or your favorite sports team actually being good for once. It’s happiness and peace and calm, eternally.

“The Good Place” was the best of us.

Michael Schur’s NBC comedy, starring Ted Danson, Kristen Bell, William Jackson Harper, Jameela Jamil, Manny Jacinto and D’Arcy Carden, quickly became one of the best and most popular shows on TV when it premiered in 2016, a topsy-turvy, twist-filled contemplation about the ethics and morals of humanity that was somehow hilarious.

The show spawned PG-rated curses, Halloween costumes and the No Context Twitter account with almost 150,000 followers that does nothing more than post screenshots from episodes. “The Good Place” became a cultural movement before you could write a rap musical about Kierkegaard and his teleological suspension of the ethical.

It’s ending now, though; Schur announced in June that the fourth season, premiering Thursday at 9 p.m., will be its last, calling it “the right lifespan.” “The Good Place” will have a chance to tell its story exactly as Schur and the writers want it to be told. And that, in some form or another, will end with a resolution for the four humans who aren’t the worst of us but weren’t the best, either.

“We start right where we left off, essentially at the moment of Chidi, newly memory-erased, entering Eleanor’s office,” Schur told the Daily News. “The beginning of the season is the launching of the actual experiment. They’ve been guinea pigs for three years and now they’re scientists. They’re in charge of trying to make everyone go through what they went through.”

Schur teased a twist by the end of the first episode, in true “Good Place” fashion, and promised that the experiment will last less than half of the season, but wouldn’t divulge anything more than that, in true Schur fashion.

The twists, for better or worse, make “The Good Place.” They’re why viewers keep coming back. Because you want Eleanor, Chidi, Tahani and Jason to succeed. If they can become good people, maybe you can, too.

That was always, at its core, the idea behind “The Good Place.” How can I be good? How bad is too bad? Can you come back from bad? How do you turn it around? It’s a series of questions without an answer, because Maya Rudolph unfortunately isn’t actually the judge of the afterlife and, almost certainly, there isn’t actually a point system. 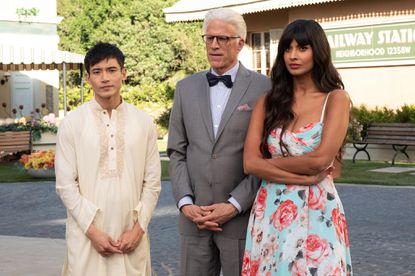 “Where I ended up, and where the show ended up, is that you’re trying. You’re not being selfish, you’re not ignoring your effect on other people, you’re not callous or unthoughtful. Every day, you’re waking up and asking yourself a few basic questions: What the hell am I doing? Am I making the world better or worse? Is there a better thing I could be doing than the thing I am doing?”

It’s an impossible ask. Even Schur knows that.

“It’s exhausting,” he joked. Or maybe it wasn’t a joke at all.