The Federal Reserve on Wednesday left interest rates at rock-bottom and pledged to continue buying government-backed bonds at a steady pace as it tries to support the economy’s recovery from the coronavirus downturn.

At the same time, the central bank painted a sunnier image of the American economy, which is climbing back from a sudden and severe recession caused by state and local lockdowns meant to contain the coronavirus.

“Amid progress on vaccinations and strong policy support, indicators of economic activity and employment have strengthened,” the policy-setting Federal Open Market Committee said in its post-meeting statement. “The ongoing public health crisis continues to weigh on the economy, and risks to the economic outlook remain.”

After reaching a low point a year ago, employment is rebounding, consumers are spending and the outlook is increasingly optimistic as vaccines become widespread. Data that will be released on Thursday is expected to show gradual healing in the first three months of the year, which economists think will give way to rapid gains in the second quarter.

Still, Fed officials have signaled that they will keep interest rates low and bond purchases going at the current $120 billion-per-month pace until the recovery is further along. When it comes to government-backed bond buying, a policy meant to make many kinds of borrowing cheap, the Fed has said it would like to see “substantial” further progress before dialing it back. The hurdle for raising rates is even higher: Officials want the economy to return to full employment, achieve 2 percent inflation, and expect inflation to remain higher for some time.

Jerome H. Powell, the Fed Chair, will speak at a webcast news conference at 2:30 p.m.

The economy is clearly improving from the coronavirus shock. Unemployment, which peaked at 14.8 percent last April, has since declined to 6 percent. Retail spending is coming in strong, supported by repeated government stimulus checks. Consumers have amassed a big savings stockpile over months of stay-at-home orders, so there’s reason to expect that things could pick up further as the economy fully reopens.

Yet room for improvement remains. The jobless rate remains well above its 3.5 percent reading coming into the pandemic, with Black workers and those in lower-paying jobs disproportionately out of work. Some businesses have closed forever, and it remains to be seen how post-pandemic changes in daily patterns will effect others, like corporate offices and the companies that service them.

Plus, while the virus appears to be coming under control in the United States, it continues to rage in parts of the world, like India. That raises the prospect that it could morph into a more dangerous variant, keeping the public health risks alive.

Against that backdrop, the Fed has repeatedly said that it wants to see realized improvement in economic data — not just expected healing — before it dials back its substantial economic support. Based on their March economic projections, most Fed officials are penciling in interest rates near zero through at least 2023.

Still, some economists have warned that the government’s massive spending to heal the economy from coronavirus may overdo it, sending inflation higher. That might force the Fed to lift interest rates earlier than expected, they argue. Markets have at times jittered on signs that inflation might be coming, concerned that it will cause the Fed to lift rates, which tends to dent stock prices.

Inflation is expected to pick up this year, both mechanically as it laps very-low readings from last year and because the economy is likely to experience bottlenecks as it reopens and companies have to ramp up production to keep pace. That could send prices higher as shortages bite.

But Fed officials and most forecasters expect that bump to be temporary, settling down by the end of the year or early in 2022.

Because the central bank wants to average 2 percent inflation over time — and has in fact spent years trying to coax tepid price gains higher — its officials aren’t treating the bump as a worrisome development.

“It’s the Fed being future-oriented, not the market, right now,” Nela Richardson, chief economist at the payroll service and data company ADP, said before the release, noting that the economy has changed relative to decades past and the central bank has kept that in mind.

“Slower growth, less risk of inflation for full employment, that’s what the Fed is seeing beyond the summer surge,” Ms. Richardson said.

US abortions rise: 1 in 5 pregnancies terminated in 2020 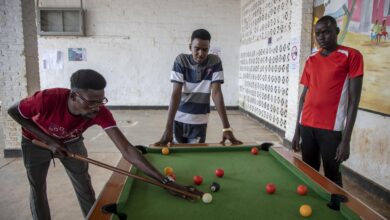 Refugees in Rwanda warn of challenges for arrivals from UK

How gardeners can control pests and also protect pollinators

June 15, 2022
Check Also
Close
Facebook Twitter WhatsApp Telegram Viber
Back to top button
Close
Popular Posts
We use cookies on our website to give you the most relevant experience by remembering your preferences and repeat visits. By clicking “Accept”, you consent to the use of ALL the cookies.
Cookie settingsACCEPT
Manage consent