Dozens of students at two Manhattan highs schools separated by a staircase — and a glaring racial and economic gap ? walked out Monday in the first of a weekly protest of the inequity.

The demonstrators who attend NYC iSchool and Chelsea Career and Technical Education High School, which share a SoHo building, say they want a fix for the segregation that’s become endemic in city high schools.

“It is clear to see the inequities between our schools that are separated by a staircase," said Carla Gaveglia, a senior at NYC iSchool, an academically selective program with a 41% black and Hispanic racial mix.

At in-house neighbor Chelsea CTE, 81% of the students are black and Hispanic — and it has more than double the proportion of kids who qualify for free or reduced-price lunch.

“You can tell who goes to iSchool, who goes to Chelsea,” said Alex Ruiz, a senior at Chelsea CTE, noting that kids enter through different doors and steer clear of each other aside from shared sports teams.

“It’s an extremely diverse campus, but you can definitely see something’s rather off when it comes to demographics.”

But Ruiz, who aspires to be a public defender, got an an occasional peek at the wealth of academic resources available at his in-house neighbor. In ninth grade, an iSchool science class invited students from Chelsea to participate in an experiment where students tested gravitational force with marbles and magnets.

“It was a really cool experiment,” Ruiz said. But the fact that “they even had the opportunity to conduct something like that, me looking at my science class, that didn’t seem feasible at all because we were so focused on the curriculum." The disparities only widened as college approached. Ruiz said he watched iSchool kids celebrate acceptances to prestigious private universities each year while his friends flamed out at community colleges or skipped out on higher education altogether.

State data also shows iSchool students were more likely to complete their college courses. According to numbers compiled by the group Ed Trust, 59% of low-income iSchool graduates from 2012 and 2013 who went on to public colleges in New York finished those schools by 2018 compared with just 36% of Chelsea CTE grads.

Ruiz has exhausted so much of his school’s curriculum that he now has three periods of gym every day. He believes he and his classmates could benefit from the advanced courses and intensive college preparation that kids at iSchool receive.

“It’s not a knock against who they are,” he said. "It’s just they’re given resources that we can’t even fathom.” 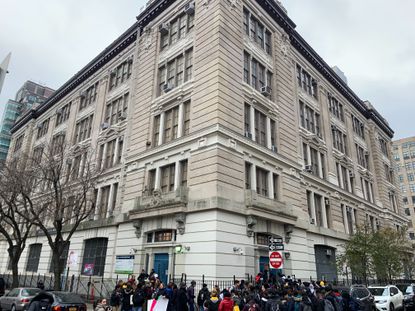 Ruiz and Gaveglia, both members of the advocacy group Teens Take Charge, lay the blame at a citywide high school admissions system that lets schools pick students based on metrics like middle school grades and test scores.

The teens pledged to strike every Monday until the Education Department abolishes the admissions screens and requires high schools to admit a mix of high and low-achieving students.