Teen climate activist Greta Thunberg lectures world leaders during UN summit: ‘You have stolen my dreams and my childhood’

Teen climate activist Greta Thunberg lectured world leaders about their inaction at the United Nations on Monday, vowing that "we will not let you get away with this."

Thunberg, 16, insisted during an impassioned speech at the Climate Action Summit that proposed emission cuts only have a 50% chance of having the desired impact.

“Maybe 50% is acceptable to you,” said Thunberg. “But those numbers don’t include tipping points, most feedback loops, additional warming hidden by toxic air pollution, or the aspects of justice and equity. They also rely on my and my children’s generation sucking hundreds of billions of tons of your CO2 out of the air with technologies that barely exist. So a 50% risk is simply not acceptable to us — we who have to live with the consequences.”

The teen, who is from Sweden, indicated that she “should be back in school on the other side of the ocean.”

“Yet you have come to us young people for hope,” she said. "How dare you. You have stolen my dreams and my childhood with your empty words. 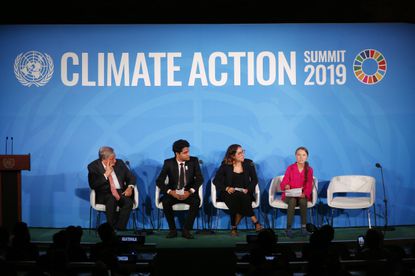 “If you choose to fail us, we will never forgive you. We will not let you get away with this," she added.

Multiple leaders vowed to do more about climate change after Thunberg spoke. President Trump stopped by the summit, but did not comment.

Former New York City Mayor Michael Bloomberg, the UN’s special climate envoy, thanked Trump for stopping by, but added that it might prove useful “when you formulate climate policy.”