A hit-and-run driver fleeing a Brooklyn fender bender slammed into a car carrying five people, critically injuring three of them — and then ran off, abandoning his overturned flaming vehicle, cops said. 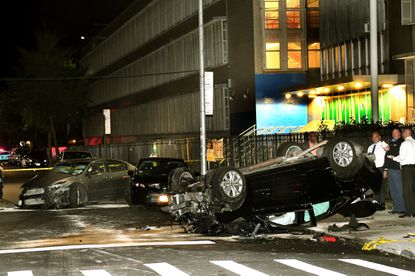 The heartless driver was speeding the wrong way down Sutter Ave. in Brownsville in a Chevrolet Impala, fleeing the scene of an earlier crash, when he T-boned a Nissan Altima in the intersection at Chester St., officials said.

The force of the impact knocked the Altima about 100 feet before it rammed into a row of parked cars. The speeding Impala flew through the air, overturned and burst into flames.

“I was in bed and we heard a loud noise," said Annmarie Wooten, 51, who lives across the street. “My husband and I went to the window and we saw a car turned over on fire.”

The stunned driver of the overturned Impala stumbled out and ran off, leaving the trapped victims in the Altima he struck to fend for themselves, cops said. Four of the five Altima occupants made it out on their own.

Medics took the five victims to Brookdale Univeristy Hospital, where three of them were listed in critical condition.

“This car was really crushed up,” Wooten said of the victims’ car. "The guy sitting in the front was really trapped. It took a while to get him out. The driver was able to get out. They were screaming and calling him. I felt so bad . . . He wasn’t moving or anything.”

The driver of the Impala has not been caught, cops said.

“I’ve lived here for 20-something years and I’ve never experienced something like this," Wooten said.