At least seven students were killed and more than 60 were injured after a partial school collapse in Kenya’s capital city Monday.

The Precious Talent Top School in Nairobi was reduced to rubble, leaving dozens of anguished families searching for their children or grieving their deaths in a tragedy many residents blamed on cheap construction.

Officials said at least two children were in critical condition, but the victims’ ages were not immediately clear. One of the survivors told The Associated Press that the structure came down very quickly.

“We were in class reading and we heard pupils and teachers screaming, and the class started collapsing and then a stone hit me on the mouth,” 10-year-old Tracy Oduor said.

A resident said the children “were all running away and crying.”

The private school is located in a fast-growing, relatively poor community in Nairobi and houses more than 800 students.

Resident Peter Ouko said the building materials used at the school can easily break with one’s own hands.

“This is chicken wire, not a construction material, and someone had the guts to use this to build a construction for our kids," he said. "I think this is basically premeditated murder.” 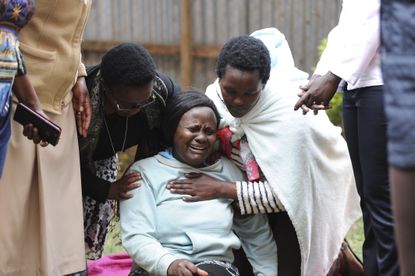