A Haitian senator opened fire outside Parliament, where legislatures were voting to confirm a new prime minster Monday.

Injured in the chaos was a photojournalist with the Associated Press, who had bullet fragments in his face, according to The Guardian, and a security guard. The latter’s injuries were unclear.

Sen. Jean Marie Ralph Féthière, from the northern part of the island, was spotted waving a gun, which he said he’d use if the crowd didn’t let him through, according to another senator.

Féthière told a Haitian news station he acted in self-defense, though he didn’t confess to shooting either of the men hit and said he wasn’t aware a journalist — reportedly wearing a helmet and vest with “press” emblazoned on them — was in his path. 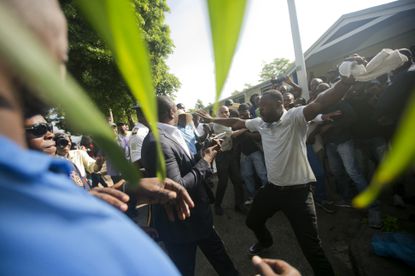 Monday was the Haitian senate’s second consecutive meeting to confirm its new prime minister, Fritz-William Michel. The contentious process has seen fistfights in parliament in the weeks leading up to the confirmation hearings.

Divisive Haitian president Jovenel Moïse has been trying to expedite the process, according to the Guardian, which reports he’s been widely opposed by critics who blame him for the country’s ongoing financial problems.