Trump’s bid to lean on Ukrainian President Volodymyr Zelensky to launch an investigation of the Democratic presidential candidate and his son, Hunter Biden, was revealed in startling detail in transcripts released just before Jeffries spoke.

And Giuliani plays a starring role.

“Mr. Giuliani is a highly respected man. He was the mayor bf New York Ci:ty, a great mayor, and I would like him to call you,” Trump told Zelensky.

The Brooklyn Democrat seized on the ex-mayor’s freelance fixer role.

"The president brought it up, and said, multiple times, according to the transcript, I need you to talk to Rudolph Giuliani," Jeffries said, before laying into the the former mayor.

"What role does Rudolph Giuliani have in this government? Is he in the Department of Justice? Is the Secretary of State? Is he an ambassador to Ukraine or to the European Union?" Jeffries said.

"Rudolph Giuliani is the president's political hitman," Jeffries added, before describing the hit Trump allegedly tried to contract for Giuliani with Zelensky.

The president talked up his personal lawyer, though it’s not clear what Giuliani’s role would be.

“Rudy very much knows what’s happening and he is a very capable guy. If you could speak to him that would be great,” Trump says in the transcript.

"In an official conversation with the president of Ukraine, [Trump] directed the Ukrainian president to have a follow up conversation with Giuliani as part of the effort to dig up dirt on Joe Biden," Jeffries said. "Period, full stop, that is lawless. That undermines our national security, that is an abuse of power, that is unpatriotic, that undermines the electoral process and our democracy, and the American people will not stand for it." 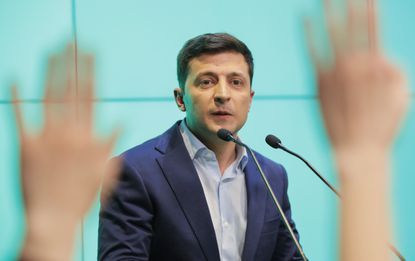 “Not only was Rudolph Giuliani brought in, but Department of Justice, Attorney General Barr — exactly the crime we were concerned about, blurring those lines between the political, our national security, and the official role of the president of the United States,” Clark said.

Giuliani's fellow New Yorker was not the only Democrat to single him out.

“Rudy Giuliani needs to explain this under oath. The Senate Foreign Relations Committee should call a hearing ASAP,” Sen. Jeanne Shaheen tweeted after Giuliani said in a television interview that he never got involved until the State Department called him.

The former mayor did not respond to calls seeking comment.

Trump pointedly never told Zelensky to contact traditional foreign policy players like Secretary of State Mike Pompeo or intelligence chiefs who would typically be involved in any sort of legitimate diplomatic effort with Ukraine.

Giuliani says he kept the State Department and the White House updated on his meetings with Ukraine government officials and other sources in the Eastern European nation, which is battling a Russian-backed separatist revolt.

Waving his cell phone, Giuliani shouted down the claim that he acted out of line during a remarkable appearance on Fox News.

Trump appears to back up that claim by repeatedly citing his personal lawyer as a key contact who should effectively be considered as speaking for the president.