‘Oh God, what is that?’: Bystander hit by stray bullet in Brooklyn

A bystander wounded when a gunman opened fire on a Brooklyn street didn’t at first realize he had been shot.

He should have known - it wasn’t the first time.

Ronald Stevens, 59, had just left a dinner outing with his brother in Bedford-Stuyvesant when he was hit by something that felt like a punch in the jaw.

“Something hit me in the face,” Stevens told the Daily News. “It felt like a sledgehammer. I was like, ‘Oh God, what is that?’”

It was a stray bullet fired from the gun of a man caught on video squeezing off shots as he walked near Gates Ave. and Nostrand Ave. about 8:45 p.m. Sept. 13. Cops released the startling video Wednesday and asked the public’s help identifying and tracking down the shooter.

But the last time Stevens was shot, he was not so innocent. That was in 1996 in Harlem, when he says he was blasted five times during a drug deal gone bad.

“I didn’t realize I had been shot,” Stevens said. “I thought somebody hit me. When I got to the hospital that’s when they told me, ‘You’ve been shot.’ I didn’t believe it at first. I asked them, ‘Where’s the bullet wound then?’ When they showed me the bullet wound, I started crying.

“They said when it hit me here in the face, it ricocheted and lodged into my shoulder.”

“I was just walking by and it hit me,” Stevens said. “ I didn’t know the guy. I don’t know anybody in that neighborhood . . . I imagine it was probably a young kid or something, just having fun, running around shooting a pistol,”

Stevens said he recklessly shot off a gun himself as a child.

“My brother had a .38 pistol,” he recalled. "He used to keep it in this drawer. One day he left me in the house by myself and I took the pistol and I fired it out the window. Bam! And it struck somebody else’s window. Nobody got shot but my brother beat the hell out of me.” 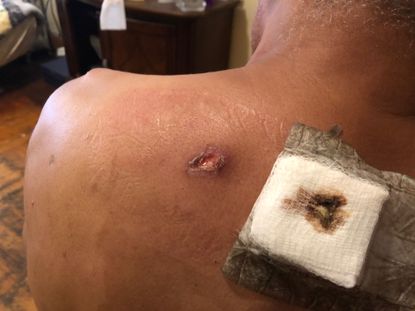 The bullet from this month’s shooting remains lodged in his shoulder and Stevens is pushing doctors to try to take it out.

“What’s the sense of having a bullet lodged in me?” Stevens said. “That doesn’t make any sense. In the winter time, when it starts snowing and you start shivering, this thing is going to be painful. They’re going to have to remove it. Won’t it get rusty in me? That’s crazy.”

Yet Stevens said he holds no animosity towards his shooter.

“I’m not angry," he said. "But you need to learn to channel your aggression and stop doing foolish things before you wind up on Rikers Island. Rikers Island is not the place to be. All these guys talk tough but the minute they get there, the first person they call is their mom.”

He’s a little more cautious now when he heads outside.

“I tiptoe through the streets now,” Stevens said “I don’t go out too often.”