The city has seen a significant drop in arrests and moving violations since Officer Daniel Pantaleo was fired for the chokehold death of Eric Garner, fueling concerns from top brass that rank-and-file cops are in a slowdown to protest the controversial decision, officials said Wednesday. 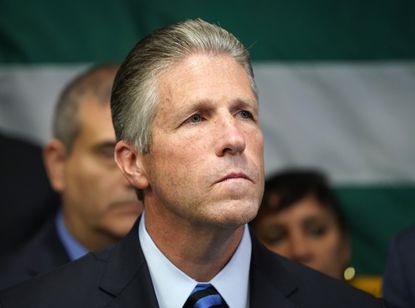 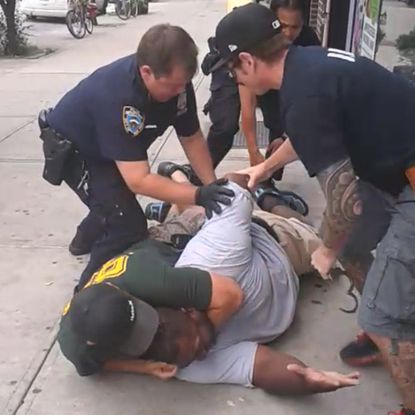 Police Commissioner James O’Neill said daily felony arrests have plummeted citywide by 11% since Pantaleo was given his walking papers Aug. 19 — down from an average of 237 a day to 201. Misdemeanor arrests have fallen by roughly 18%, from 373 to 311 a day, an NYPD spokesman said.

O’Neill said the department is looking into the drop, but wouldn’t say it was part of a work slowdown.

O’Neill wouldn’t say if anyone has been caught slacking off, and prefaced the decline by mentioning “all this month of August, crime is down.”

While overall crime was down by about 2% last month compared with August 2018, shootings jumped by nearly 20%, from 71 last August to 91 last month, officials said. There were also two more murders in August than a year prior, although murders remain down for the year by nearly 4%.

Most of the shootings have been linked to gang and drug activity plaguing neighborhoods in northern Brooklyn, Queens and Harlem, officials said.

The plunge in arrests comes after Police Benevolent Association President Patrick Lynch, on the day Pantaleo was fired, urged cops to back each other up, call for a supervisor when making a bust and request an ambulance when touching a member of the public.

“The NYPD (is) rudderless and frozen, and Commissioner O’Neill will never be able to bring it back,” Lynch said following Pantaleo’s firing. “We are urging all New York City police officers to proceed with the utmost caution in this new reality, in which they may be deemed ‘reckless’ just for doing their job. We will uphold our oath, but we cannot and will not do so by needlessly jeopardizing our careers or personal safety.”

Critics said taking those extra steps could tie up cops for hours and slow police response.

A PBA spokesman on Wednesday declined to comment on the drop in arrest activity, providing the Daily News with Lynch’s earlier comments on the issue.

PBA delegates unanimously passed two no-confidence resolutions after Pantaleo’s firing, calling for O’Neill to resign and for Gov. Cuomo to remove Mayor de Blasio from office. The votes are purely symbolic, and it’s unlikely either event will occur.

De Blasio on Wednesday shrugged off concerns of a work slowdown.

“What I see is officers doing their jobs,” de Blasio said. “I see some sporadic issues that have to be addressed and that will be addressed on a precinct level.”

Rank and file officers have also seen a drop in arrest and summonses, but don’t believe it was set off by Pantaleo’s termination. Cops have been upset for some time on being overly scrutinized by One Police Plaza and the public, while the courts quickly release those they do arrest, one officer said.

“Pantaleo’s been gone for five years, so no one is worrying about that,” said the officer, who wished not to be named. “No one is supporting the cops, so why should we do God’s work when no one cares?”

“I could go outside right now and make five arrests, but why should I?” the cop asked. “We’re getting sick of the bull----.”

Another cop said August was a bad time to compare arrest numbers, since a fair amount of cops are on vacation.

Police said Garner, 43, was selling loose, untaxed cigarettes on a Staten Island sidewalk, and when he refused to surrender, cops tried to take the 6-foot-2, 395-pound Garner into custody, with Pantaleo grabbing him from behind.

Garner yelled “I can’t breathe” 11 times while he was on the ground — all of it captured on a cell phone video obtained by the Daily News.

Pantaleo was cleared by a Staten Island grand jury, and federal prosecutors chose not to file civil rights charges against the cop. O’Neill ordered his termination from the NYPD after a department trial judge found him guilty of using a banned chokehold on Garner and lied to department officials about his actions.

O’Neill said each commanding officer will make sure their officers are doing their jobs appropriately and review sick times, response times and radio runs to ensure efficiency.

"This is a department that has been very efficient in bringing down crime, specifically in the last five years,” O’Neill said. “It’s our responsibility to make sure that we continue to do that.”