The city’s spruced-up yellow bus system had some sputters as schools opened Thursday. 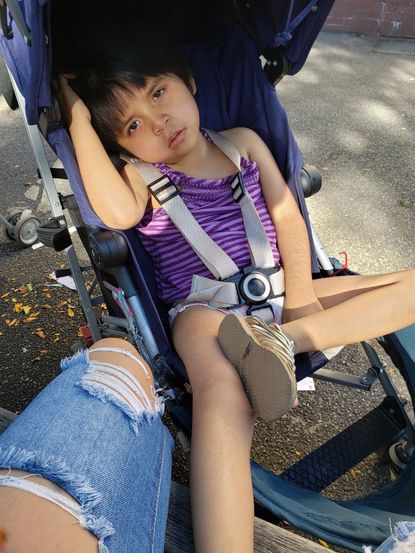 Hundreds of buses reported delays and bewildered parents said they couldn’t get through to phone operators to track the whereabouts of missing vehicles.

Even as city data pointed to improvement overall from last year’s disastrous busing start to the school year, some parents said Thursday felt like more of the same.

“It’s a shame,” said Davida Losavio, a Bronx mother whose ninth-grade daughter, Dahlia Davis-Losavio, missed her first day of high school Thursday because her bus never showed up. “The DOE really needs to crack down on this.”

Parents had logged close to 7,000 complaints with the Office of Pupil Transportation as of 2 p.m., with more expected to roll in during the late afternoon hours, said Education Department spokeswoman Miranda Barbot.

Roughly 93% of buses completed their routes on time, she said, though 469 vehicles reported delays or breakdowns during their morning runs.

That’s an improvement from last year, when nearly 27,000 complaints flooded the transportation office on the first day of school.

Officials promised a smoother start this year after a public outcry over last year’s bus snags and a City Council law requiring the installation of GPS trackers.

Bus drivers were instructed to complete two dry-runs of their routes before school started Thursday to get a better idea of the timing, officials said.

The city also promised it would be easier for parents to get the location of missing or delayed buses this year. Parents don’t have real-time GPS information, but can now call in to a transportation office hotline rather than reaching out to individual bus companies.

But Claudia Galicia, the mother of a fourth-grader with autism, said she couldn’t get through to that office this morning.

Galicia was waiting outside of her Brooklyn apartment with her daughter Micaela at 6:30 Thursday morning for a bus scheduled to bring the girl to her Harlem school at 7.

She tried the hotline for the Office of Pupil Transportation for almost an hour, getting only a busy signal.

Officials said they added dozens of staffers to the office this year to ensure faster response times, and that the center never exceeded its maximum call volume of 600 Thursday morning.

Galicia finally got a call back after she posted a tweet tagging schools Chancellor Richard Carranza, but was never told when the bus would arrive.

She decided to bring her daughter on the subway herself – pausing to take a break because her daughter gets anxious if she’s confined in transit for more than an hour.

“It’s the first day of school for me too,” Galicia lamented.

The city’s yellow bus system ferries about 150,000 students each day. The majority are special education students, whose transportation is guaranteed in their individual education plans.

5-year-old Yaretzi Anzures, a first-grader with a brain malformation who needs to travel with a paraprofessional to her school in Corona, Queens, missed her first day of class after the bus was delayed, and the paraprofessional said she couldn’t wait any longer, said her mom, Maria Anzures.

The Education Department lifted a waiver this year that protected bus companies from fines for delays during the first days of school. The companies are now subject to penalties of up to $230 for dropping kids off 5 minutes before school or later.

The city has promised to develop a new app, with the rideshare app Via, that allows parents to track the location of their child’s bus in real time. But officials haven’t announced a rollout date.

At a press conference early Thursday, Mayor de Blasio said he’d heard things were “going well” with the buses, but acknowledged “anything short of every bus route not being ready is not sufficient success.”

“I think we are hindered by a very arcane system,” he added, referring to the patchwork of private bus companies the city relies on.

De Blasio and Carranza spent Thursday morning touring schools in all five boroughs. The mayor trumpeted the expansion of his preschool program for three-year-olds and promised to give a careful review to a proposal to replace the city’s Gifted and Talented program with schoolwide enrichment programs.