A city school bus dropped off a frightened 10-year-old autistic boy at the wrong Bronx school Monday – and never let his parents know about blunder, his angry mom told the Daily News.

Aaron Rosario was so afraid when chaperones on his new school bus ushered him off at P.S. 291—more than a half-mile from his actual school — that he couldn’t speak, said his mother, Yarleen Anavitate.

“He was very intimidated,” she told The News. “He was afraid that he wasn’t ever going to come home.”

A P.S. 291 teacher, however, immediately noticed the unfamiliar face and managed to flag the bus before it left to get Aaron back aboard.

Education Department officials disputed that account. Department spokeswoman Miranda Barbot said, “as reported by the bus company, the student was dropped off at the correct school and was never left unsupervised.”

“We are looking into this further and we will take appropriate follow-up action as needed,” she added.

Anavitate, acknowledging her child was was eventually dropped off at his real school, P.S. 396, said it was more than an hour late, and that the driver and matron unceremoniously left Aaron the curb without walking him inside.

“He just ran into the school, he was in shock,” she said.

Anavitate only learned of the scary ordeal after staff at P.S. 396 pieced together why the boy had arrived late and appeared so upset. She never got a call from Boro Transit Co., the bus company, or the city Office of Pupil Transportation.

“It makes you wonder who you are giving your kids to during the day,” the mom fumed.

The Monday morning mayhem was just the latest in a series of maddening transportation screwups this year, Anavitate said.

Aaron’s previous bus provider, Logan Bus Company, routinely dropped him off at school almost an hour late, Anavitate said, and both she and the school had been lobbying the city school transportation office to change Aaron’s route. That change finally came Friday, when officials switched Aaron to a route run by Boro Transit Co.

Monday was Aaron’s first day on the new route, which city officials told Anavitate would help reduce the number of late drop-offs.

Aaron, who was diagnosed with autism as a toddler, has to travel almost an hour by school bus from his family’s home in the West Farms section of the Bronx to a specialized autism program at P.S. 396 – one of only two such programs in the borough.

City records show 26 parent complaints from January through June 2019 about Boro Bus Company, which operated 1,140 routes as of last June.

Company officials referred questions to the company’s lawyer, who didn’t respond to requests for comment.

Anavitate said she’s tired of spending hours on the phone complaining about various bus companies to the Office of Pupil Transportation, and wants to know who will hold the office accountable.

"I asked them, ‘who can I complain to about you guys?’” 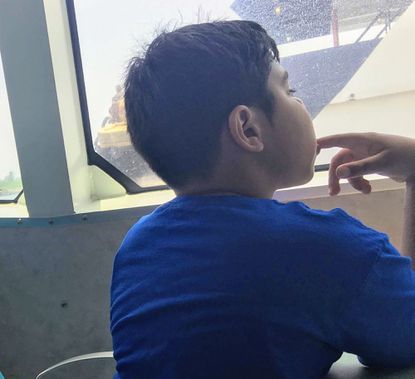