NYC pays $1.5 million to man shot by police after he alleges cops planted a gun at the scene

The sounds of a loud car wreck, followed by gunshots, brought the young man to his Brooklyn apartment window.

He peered down to see an SUV plowed into a parked car, with a man — a plainclothes cop — pinned between the vehicles. A nearby female officer slapped handcuffs on a second man sprawled face-down on the ground. As sirens roared and dozens of police and emergency workers converged in the chaos, the witness reached for his phone and pressed “record.”

It was the aftermath of a wild, three-mile car chase through east Brooklyn, ending moments earlier with the crash and the now-trapped cop fatally shooting the SUV driver and shattering the left leg of its passenger with another gunshot.

Almost 13 years after the lethal Nov. 11, 2006, encounter, the 6-1/2 minute video clip is raising questions about whether police anti-crime squad members planted a weapon inside the dead man’s SUV. Last month, after more than a decade of fighting a lawsuit filed by surviving victim Gregory Brown, the New York City Law Department agreed to a $1.5 million settlement in the case.

The deal came just two weeks after a judge ordered Officer William Warren, who fired the fatal shots, and Sgt. Vicki Lisa, who cuffed the wounded Brown, to provide sworn testimony about the video’s content. The recording was turned over to police one day after the incident, although Brown’s lawyers did not see the video for another decade.

Brown, currently jailed on a parole violation in Pennsylvania, insisted from the start that police dropped the weapon in the car.

The deadly chase began when Warren and Lisa, on anti-crime patrol, said they tried to pull the SUV over for running a red light in Bedford-Stuyvesant. The maroon Mitsubishi instead sped off, weaving through the Brooklyn streets with the unmarked black Impala in pursuit. Warren, who was behind the wheel, later recalled seeing a gun passed back and forth between the two men in the car.

But Lisa, who was working the radio, never relayed that warning to central command.

The SUV driver was 28-year-old Katrell Butler, and he had good reason to flee. Butler was a fugitive from a out-of-state police warrant after cops discovered assault rifles, drugs and counterfeit money in his Berwick, Pa.. home. Brown had his own long criminal record, including bank robbery, and was carrying more than $20,000 when shot.

Warren, a former Marine and three-year NYPD veteran, later recounted reaching into the SUV to grab the keys from its ignition and then grappling with Butler — who reached for a gun on the floor. As the vehicle started rolling, Warren opened fire: Butler was shot in the chest and killed, Brown took a bullet in the leg and was arrested.

The grainy witness video, filmed through a second-floor window screen, shows cops and emergency service workers frantically trying to free Warren from between the two autos. Although shrouded in shadow, Brown and Butler lie in the street near the crashed car. As police prepare to lift the bumper of the car that had been forced onto the sidewalk, Lisa — in a bright red T-shirt — is seen reaching out to one of the other members of her anti-crime squad.

She then quickly darts around the rear of Butler’s SUV, enters through the front passenger door and remains inside the auto for about 15 seconds.

Butler’s relatives, while acknowledging he was fleeing the police, have long insisted he was unarmed.

“He was not violent," said Juanita Alston, Butler’s sister-in-law and a former administrative aide at a Brooklyn police precinct. “If there is newly discovered evidence of a video of a gun being planted, that doesn’t surprise us." 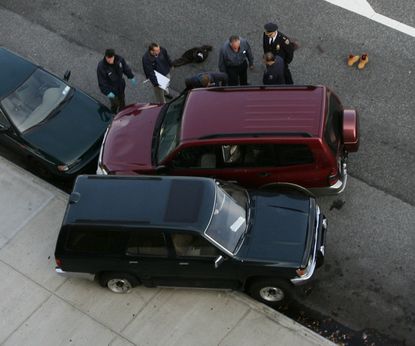 There were other issues with the crime scene. Weapons, unless they pose a threat to public safety, are supposed to be left in place for photographs and documentation by the NYPD’s Crime Scene Unit. But anti-crime team Officer Rashan LaCoste recounted finding the gun on the driver’s side floor and putting the weapon in his pocket.

Lt. Mark Molinari, now a deputy inspector, was the first uniformed officer to reach the scene. In a deposition for the lawsuit, Molinari said he did not see a gun when he looked into the SUV. Officer Kruythoff Forrester, who arrived with two other members of Warren and Lisa’s anti-crime team, said he quickly pulled the dying Butler out of the car.

In his deposition, Forrester also did not recall seeing a firearm.

Despite Warren’s claim that the driver had his hand on the gun when he was forced to shoot, a police lab test for fingerprints on the pistol, the magazine and cartridges all came up negative.

Former NYPD Capt. John Eterno, now a criminal justice teacher at Molloy College, questioned the absence of any prints on the weapon. “It raises the question ‘Was the gun wiped down clean?’” he said.

But an NYPD investigation found Warren was within departmental guidelines when he fired, and city officials deny any cover-up.

“These officers responded to a very challenging policing situation,” said Law Department spokesman Nick Paolucci in a statement. “The detective had to respond quickly when the driver presented a lethal threat. ... We stand by these members of the service and believe there was no merit to the claim they planted a weapon, but have determined that settling this long-standing case is in the best interest of the officers and the city.”

An NYPD spokesman provided the same response to The News’ questions about the case.

Warren and Lisa have since been promoted. Warren is a detective working in Brooklyn North Narcotics squad, while Lisa oversees a squad of detectives at the 60th Precinct in Coney Island. Reached by phone, Lisa refused to comment and hung up when asked about the video. Messages left for Warren and Lacoste were not returned.

Charges of attempted assault, resisting arrest and weapons possession were eventually dropped against Brown, who has endured four surgeries since the shooting and walks with a permanent limp.

The man who filmed the video recalled providing a copy to police one day later, when canvassing detectives knocked on his door. The witness, who asked for anonymity, recalled filming “out of curiosity” and never realized the significance of the footage. But Brown’s lawyers didn’t see a copy from city attorneys until 2017, ten years after the lawsuit was filed.

And it wasn’t until they studied it closely, they said, that they realized what it revealed.

Though Warren and Lisa had already given depositions, they were ordered to return for more questioning by Brooklyn Supreme Court Judge Katherine A. Levine after Brown’s lawyers argued the video showed the sergeant “apparently planting the firearm.” Levine’s ruling came on July 25, and the city settled on Aug. 9.

“Considering the portrayal in the press at the time of the incident of officer Warren as a hero cop and the portrayal of the victims as potential cop killers, I am hopeful that this video and the truth will bring some degree of peace to the Butler family,” said Glenn Miller, a partner in the firm Sivin & Miller which represented Brown in the lawsuit.