A Staten Island man set his van on fire after he drove it into a storefront in a crazed attempt to kill his ex-wife, police said Monday.

Anthony Imafidon, 42, allegedly used an incendiary liquid to ignite the van after he drove it into the Legacy Africana Market on Bay St. near Broad St. in Stapleton just before 11 p.m. Sunday, cops said.

“Since yesterday I have not had any sleep," the ex-wife told the Daily News, adding that she had no idea why Imafidon would want her dead. 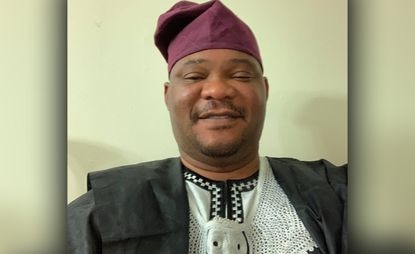 A neighbor watching from his second-floor window saw Imafidon roll up to the building in his van.

“He stopped to let a person walk past," said the 40-year-old neighbor, who declined to give his name. “After the person walked past was when he started smashing the car into the gate. He backs it up and smashes it again."

“After the second time, he gets out the van, goes to the back, gets the gasoline, pours it on the van, then lights the match,” the neighbor added.

Imafidon appeared to catch on fire before running down the block and passing out as flames engulfed the van, the neighbor said.

He was taken to Richmond University Medical Center, where he was treated and released into police custody.

“(She) is very nice to the people in this community,” a neighbor said of the suspect’s ex-wife.

On Monday, investigators returned to the boarded-up store and combed through the remaining bits of rubble. Cleaning crews swept up the burnt-up debris.

Officers said they don’t know what prompted the incident.

Neighbor Peggy Taggart, 62, looked out an apartment window after hearing the first crash.

"It sounded like a gun going off,” she said. 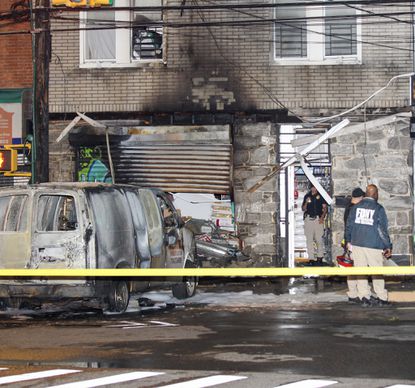