It took eight months for Marlon Pottinger’s last roll of the dice to finally come up snake eyes.

The 25-year-old Bronx dad, shot in the face over a $7 gambling dispute last November, died July 3.

His death was finally declared a homicide this week, authorities said Wednesday, after the city medical examiner determined his demise was caused by the shooting months earlier. A suspect already in custody is expected to face upgraded charges at a court appearance next month.

“They said it was over some dice game,” the victim’s longtime girlfriend Shanice Kirkpatrick told the Daily News. “Then they got into an argument and the guy called him outside. But as soon as he stepped outside, that’s when (the suspect) did it.”

Pottinger was rushed to Montefiore Medical aafter the shooting on White Plains Road near E. 241st St. in Wakefield about 1:30 a.m. Nov. 4, 2018. He remained in critical condition until his death.

Kirkpatrick, 26, and Pottinger were making plans to escape the Bronx neighborhood where they first met more than a decade before his shooting on the same local streets. The couple were hopeful of moving to Pennsylvania with their two daughters, ages 9 and 3.

“I didn’t want him to go to 241st St. . . . There’s nothing good, people die all the time over there,” said Kirkpatrick. “I told him, ‘If we’re going to grow, we can’t get stuck in that type of environment.’ That’s toxic, so that’s why we were going to leave.

“That’s my heart right there,” she said of Pottinger. “We’ve been through so much together. That was my best friend. On our first date, he went to my high school basketball game. He was kind, he was sweet. He had a good heart.”

Carter remains jailed on $600,000 bail on Rikers Island. He has six prior arrests, including one for a non-fatal shooting in February 2017, sources said.

Kirkpatrick said the months between the shooting and her boyfriend’s death were excruciating, as Pottinger bounced from facility to facility and never showed any signs of a possible recovery.

“He was brain dead,” she recalled. “His mom called me up when I was at work and told me that he just died on the machines. He just passed. I guess his body just gave up on its own.”

A teary Kirkpatrick took some solace in the expected murder charge against the jailed suspect: “I hope he rots in there. I hope he dies in there.”

But she remained despondent over the pointlessness of her boyfriend’s sudden violent demise.

“All over a dice game?” she asked rhetorically. "Are you kidding me? I heard it was over $7. ... My younger daughter is still little, so she doesn’t really understand. But when she gets up and she’s crying for her dad, I can’t tell her daddy is coming. 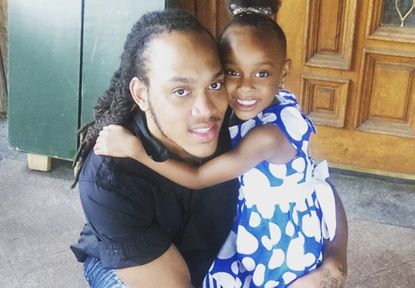 “My older daughter, I don’t really know what’s going on in her head. I know it’s bothering her ... I don’t know how to deal with the situation.”