As soon as Nicaela Cartagena dusted off a dirt-caked stone shard at an archaeological dig in Belize, she knew she’d stumbled on something special.

“It was pearly white,” she recalled. “We were like, okay this is not what we normally find here.”

The piece of stone belonged to a rare marble vase from the Maya empire, one of only about 150 in the world, and among just a handful discovered in the past several decades.

Cartagena, 27, a Bronx native, helped make the discovery as part of a unique research program at CUNY that offers community college students the chance to participate in an archaeological excavation.

Bronx Community College professor Sheldon Skagg, who helps oversee the project, said it’s likely one of the only such programs in the country at a community college.

“It’s a really incredible opportunity,” he said. Students “get foreign travel, cultural experience, and when they read about archaeology,” they’ll have an intimate understanding, Skagg said.

When Cartagena enrolled at BCC in 2010 as a nursing student, she had no intention of studying ancient artifacts. “My whole life was medical,” she said.

But an intro to earth science class piqued her interest in the subject. After she finished the class, Cartagena worked as a tutor for other students in the course. In 2014, she stumbled on a flyer advertising an archaeological dig in Belize.

“I thought, ‘that’s really cool,’" Cartagena recalled. But she assumed the trip would cost money she didn’t have, and wrote it off as a pipe dream. 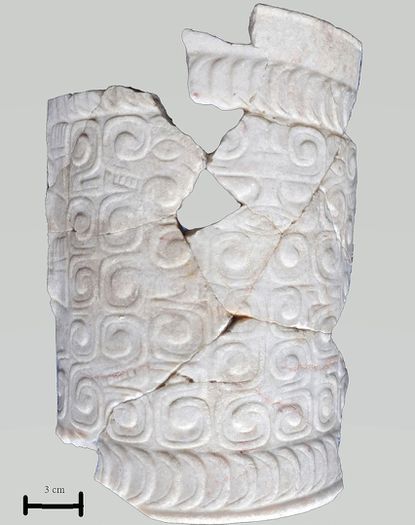 But Skagg, who’d noticed Cartagena’s enthusiasm for geology, encouraged her to apply and told her a grant could cover her expenses.

Skagg chose Cartagena to accompany him that year. It was the first time she’d visited a country other than the Dominican Republic, where her family’s from.

“I was extremely excited,” she said.

Cartagena discovered that she excelled at working in the lab where scientists from several universities analyzed artifacts from the archaeological site. In 2016, the dig supervisor asked her to run that lab — a job that sends her to Belize twice a year.

In summer 2017, the dig team, which included students, professors, and local workers, discovered the first pieces of the marble vase.

Cartagena said piecing the vase together, and discovering its historical significance, was an adrenaline rush. The scientists confirmed the vase traces back to Honduras and likely traveled across the Mayan empire as a valuable trading commodity. The team ultimately recovered between 70-80% of the original vase.

The experience altered Cartagena’s career trajectory. She transferred to City College, where she’s majoring in Earth Sciences. She plans to pursue a career as a geologist.

That’s the ultimate confirmation for Skaggs that the research project is working as intended. “It’s motivating,” he said. “Students can tie their work to actual physical things they’re doing.”