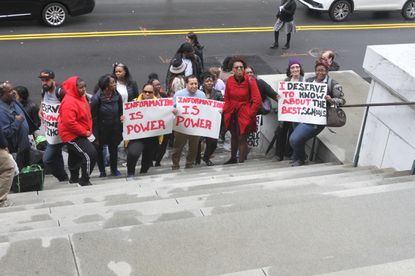 Scores of city charter schools currently use a city-owned list to send direct-mail marketing materials to city families through a company called Vanguard.

Parent leaders representing the city’s elected school boards took to the steps of the Education Department headquarters on Monday for a rally urging de Blasio to terminate the controversial arrangement.

“We’re saying our privacy is being violated," added McLean, who’s also president of the Community Education Council for District 16 in Bedford-Stuyvesant. "We’re saying, don’t give our information away.”

But, in a surprise turn of events, de Blasio delayed his decision, citing the need to consult with more parents.

While McLean led the rally of about a dozen parents who oppose the data-sharing deal, a counter-protest comprised of charter school boosters spoke out in favor of the arrangement.

“We’re just trying to get parents to have knowledge that there are schools out there,” said Crystal Aponte, 28, a maintenance worker whose daughter attends Zeta Charter School in the Bronx.

"Some caregivers don’t have access to the internet or smartphones, so getting mail is a big help,” Aponte added.

A spokesman for the city Education Department declined to comment on Monday’s rallies, citing comments made by de Blasio to reporters on Friday, when the mayor said the city was still reviewing the matter.

“We’re looking at that issue, de Blasio said at the time, promising the city would come to a decision soon about how to handle it.

Once favored by Mayor Michael Bloomberg, charter schools have found an enemy in City Hall in de Blasio, who has said he doesn’t believe the city needs any more charters.

State law caps the number of city charter schools, and operators reached the limit in March, so no new charters are being awarded in the city.

Gov. Cuomo, who’s often been friendly to charter schools, said over the weekend that he’d like to see lawmakers in Albany raise the cap.

But leaders in the heavily Democratic state legislature have indicated little appetite for the creation of more charters, whose growth is strongly opposed by powerful teachers unions and other groups.