One of the city’s worst-performing school bus companies is also one of the most expensive for taxpayers – collecting a special subsidy from Mayor de Blasio that other firms don’t get.

Reliant Transportation had the second most delays and breakdowns in recent school years, but Hizzoner has still poured hundreds of millions into the company after fundraising thousands from its executives and workers. Reliant executive Alex Lodde, for example, donated $100,000 to de Blasio’s efforts to flip the state Senate Democrat in 2014, with the cash steered toward the Putnam County Democratic Committee.

The company’s school buses logged 28,963 delays and 3,367 breakdowns in the last four school years, according to a Daily News analysis of city figures. Just over 99% of Reliant’s delays and breakdowns were for buses carrying special education students.

"The Mayor routinely circumvents the City Council to funnel funds directly to unreliable Reliant Transportation," Councilman Paul Vallone (D-Queens) said. "It comes as no surprise that Reliant can't even be bothered to get our students to school on time, despite receiving the largest school bus contract in the city.”

The number of Reliant buses that have arrived late or broken down increased 35% since the 2015-2016 school year – when the cost of the company’s contracts with the city also jumped 17%.

Reliant’s contract was a whopping $120 million last fiscal year, the most of all 46 companies operating buses across the five boroughs, according to preliminary 2019 figures from the Department of Education.

Company contracts have cost a total $427 million since July 2015.

Reliant had 911 routes last school year, the most of any school bus company, and saw about 10 delays and breakdowns per route. But the company also had the fifth-highest cost per route — $177,997.

That’s because the company is the only one to profit from nearly $200 million in subsidies from city taxpayers to pay drivers seniority benefits outside of their contracts. The money goes toward salaries for veteran drivers, letting Reliant off the hook for covering the full costs of those workers.

Then-candidate de Blasio promised in the 2013 race for mayor that he’d reverse a decision made by the Bloomberg administration to eliminate those job protections from city contracts, partially because a court ruled they were illegal. Former Mayor Bloomberg cut pay when he rebid the bus contracts in 2013 to reduce costs, prompting a month-long strike.

Attempting to quell the lingering dispute, the de Blasio administration fast-tracked City Council legislation in 2014 creating a $42 million grant to boost pay and benefits for certain bus drivers. The bill let the city fund the difference between what veteran drivers used to be paid and what they earned after the 2013 contract conflict.

Only a few companies that were in the 2014 bid year were allowed to get a piece of the grant, and Reliant was the only one to take advantage of it.

Since then, de Blasio has directly funded the payments without Council approval. The city had spent another $148 million on grants and subsidies for Reliant drivers by this past June.

Critics of the grants say they help line the company’s pockets by cutting costs.

“This mayoral overreach, which costs taxpayers millions of dollars each year while yielding poor results for our city's students and families, must come to an end," said Vallone, who was one of six Council members who voted against the original 2014 grant. 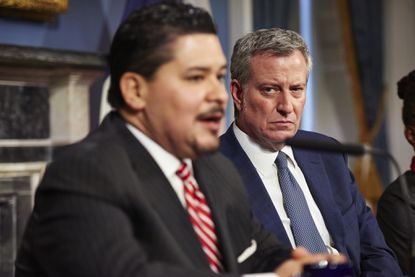 Council Minority Leader Steve Matteo (R-Staten Island) said he voted against the grant “because I believed then, as I do now, that it set a horrible precedent by undermining a lawful city contract and rewarding the companies that underbid others by cutting costs at the expense of service.”

“That is just not how the process is supposed to work,” Matteo said.

Reliant spokesman Jeff Womack said that the company’s size is inflated because it’s one of the few firms to consolidate their contracts.

“We have a strong safety record, one of the youngest fleets, and are one of the only companies with a full roster of drivers and matrons,” said Womack, who also reps Reliant’s parent company, MV Transportation. “New York City school bus drivers and matrons – and responsible contractors like Reliant who, with support from existing subsidies, pay a living, union wage – have been under constant attack by companies who are hell-bent on exploiting workers with poverty wages and treating special needs children and their families like an afterthought.”

Reliant and Amalgamated Transit Union Local 1181, which represents their drivers, threatened a school bus strike this year to pressure state lawmakers into passing legislation that would include the “Employee Protection Provisions” in new contracts. Those protections used to be standard.

The legislature passed the bill, but Gov. Cuomo hasn’t taken a position on the measure. He vetoed similar legislation in 2016.

“We should be striving to make sure you have the most experienced, the most reliable school bus workers that the city can provide,” Cordiello said.

The city’s generosity to Reliant follows thousands in donations company employees have showered on de Blasio.

Sixty-seven bus drivers and other employees at Reliant or its parent company MV Transportation gave a total $900 to de Blasio’s 2013 campaign, and then-MV CEO Robert Carter Pate gave him $1,000.

De Blasio’s political fundraising – including for the state Senate flip – was the subject of multiple investigations. Federal and state prosecutors eventually decided against charging de Blasio or his aides, but one still said he intervened on behalf of donors seeking favors from City Hall.

De Blasio spokeswoman Jane Meyer said the subsidy program “is about keeping our kids safe and providing fair wages" and pointed out Reliant has been fined about $2.4 million for service disruptions since the the 2015-2016 school year. 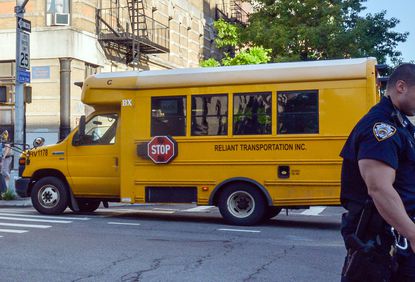 “These hardworking bus drivers deserve more than poverty wages, and all of these decisions are based on what is best for our kids, not donations,” Meyer said.