LGBTQ self-defense classes are gaining popularity around the world

To address an ongoing problem of anti-LGBTQ violence, people around the world are turning to a method of self-protection that has been around for millennia: martial arts.

Growing in popularity on both sides of the Atlantic, workshops and classes catering to the LGBTQ community have been the answer to individuals who have seen an increase in sexual orientation and gender identity-based violence; but the phenomenon has been around for years.

In London, the U.K.’s largest LGBT+ martial arts club Ishigaki Jujitsu has been in operation for over 20 years.

Classes focus on promoting “a safe and tolerant environment,” a description on its website reads, by teaching “a series of realistic attacks and defenses to [students] — strangles, grabs, [and] being attacked while on the ground.”

“Over two hours we learn how to escape from various grips, practice kneeing people in the groin, and spend a large portion of the classes screaming in each other’s faces – which is extremely cathartic,” the author James Greig, who attended a class in June wrote on Huck.

Greig, who was once “on the receiving end of a homophobic attack,” explained why: "As I repeatedly elbow my partner in a padded glove intended to represent a human face, I feel as deadly as ‘Buffy the Vampire Slayer;’ as coldly brutal as Uma Thurman in ‘Kill Bill.’ ”

Why Jiujitsu? Because "it’s not as safe out on the streets of London as any of us would like, the website description continued. “Jujitsu is about practical self-defense.”

Self-defense to be applied on a day-to-day basis is what made Rio de Janeiro-native Ricardo Lima enroll in a self-defense class.

Despite its gay-friendly image — São Paulo’s Pride Parade is the the world’s largest pride demonstration; Rio de Janeiro’s famous gay beach attracts tourists all year — Brazil’s homophobic violence is one of the worst in the world.

“After being threatened many times in my life, since I was a teenager, in different places, I started to feel scared of going out and even walking toward men on the streets,” 29-year-old Lima told NBC News.

Lima, who said he’d never have imagined joining the predominantly straight world of martial arts, joined Piranhas Team — a self-defense group created by an LGBTQ group in Rio de Janeiro — after being invited by a friend.

He joined the group’s Krav Maga class, a military self-defense and fighting system of martial arts that was developed for the Israel Defense Forces during World War II, and became a favorite among celebrities such as Brad Pitt, Jennifer Lopez and Leonardo DiCaprio.

The idea behind Krav Maga (which means ‘contact combat’ in Hebrew) is to prepare students to respond to real-life scenarios of attacks in an effective way — a skill that can prove to be extremely useful for the LGBTQ community in Brazil.

According to Grupo Gay da Bahia, Brazil’s oldest LGBTQ rights organization in 2018, 320 people were murdered in the country while another 100 died by suicide, making the total number of deaths higher than in countries where homosexuality is punishable by death

Additionally, President Jair Bolsonaro, a self-proclaimed “proud” homophobe, has famously stated and that he’d“rather (his) son die in a car accident than be gay.”

The worrying trend in anti-LGBTQ violence is, of course, not exclusive to Brazilians.

“We have seen a dramatic spike in hate crimes against LGBT people across the country recently, and so many of us are on edge because of it,” Nate Sweeney, the former executive director of LGBT Health Resource Center at Chase Brexton Health Care in Baltimore said in 2017, when the center offered an event entitled: “Queer Protection: An LGBTQ Self Defense Class for Our Community." 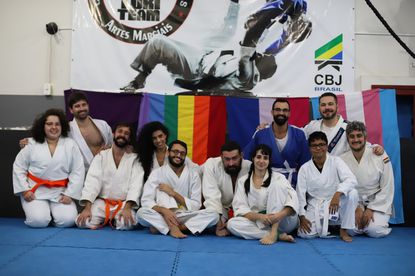 The event, led by Angie Tarighi, the CEO and founder of the Women’s Self Defense Institute, featured “instruction on awareness, prevention and self-realization of your own physical power," and it was offered to help address the recent increase in anti-LGBTQ crime in the Baltimore community.

“Now, more than ever, it’s important to provide an affirming space for our community to learn practical skills to protect themselves in the face of violence,” Sweeney added.