Whether a sharp suit on “L.A. Law,” a detective’s blazer on “NYPD Blue,” the presidential attire on “The West Wing,” a cardigan on “Sons of Anarchy” or a tailored wardrobe on “Bluff City Law” Smits wears it with panache.

There was, though, one jacket he pined for and had to leave in Brooklyn.

“I quit the football team to join the drama club,” Smits said about his years at Thomas Jefferson High School. “I was totally ostracized. Moe Finkelstein was the coach, and when you quit the team, you had to give up your leather jacket."

When Smits was crowned King of Brooklyn at 1991’s Welcome Back to Brooklyn Festival, his alma mater presented him with another varsity jacket. The borough will always be home, but Smits, 64, moved around as a kid, “depending on how much money the family had.” Brownsville to Park Slope, the Bronx, Puerto Rico, and back to Brooklyn where he attended Brooklyn College before Cornell for graduate school.

For the last few months, he’s lived in Memphis shooting NBC’s “Bluff City Law,” which premieres Monday following “The Voice.” Here, music drifts out of Beale Street bars and hangs in the late August heat. The Lorraine Hotel, where Martin Luther King Jr., was slain, is now a civil rights museum. That music, history and Memphis BBQ are part of the series.

While younger actors gush over working with a man they idolize, even seasoned actors rave about Smits. As always on a set, everyone agrees the actor first on the call sheet sets the tone.

“It’s very, very rare that you have someone so aware of the set and so aware of everyone’s needs and so specific with the way he expresses it,” said Michael Luwoye, who plays a lawyer, and was Aaron Burr and Alexander Hamilton in “Hamilton.”

Jayne Atkinson, with dozens of TV, movie and stage credits, said she loves that Smits goofs around “until right before he has to go on. He’s incredibly supportive and hardworking, and he’s bringing his A-game every moment.”

With “Bluff City Law” Smits returns to playing a lawyer, his breakthrough role. As Victor Sifuentes on “L.A. Law,” he won an Emmy and was nominated for six. He’s also won two SAG awards, two Almas and a Golden Globe.

Over the years, Smits guest starred on dozens of TV shows, and when committing, picked wisely. One of the best, “Cane,” was a casualty of the 2007 Hollywood writers’ strike. Since, he’s been a regular on “Dexter,” “24: Legacy” and “How to Get Away with Murder” but “Bluff” marks his return as series’ star.

After 33 years in the business, Smits has a gut feeling about what shows have legs. Coming off a day shooting the sixth episode of the 12 ordered, he’s optimistic. The network has put a massive marketing effort behind it.

“I tend to stay away from the Atticus Finch parallels because of the South,” Smits says describing his character, Elijah Strait, who champions the little guy. The character’s no saint and the pilot alludes to his dating life outside of his marriage.

Strait is widowed, and estranged from his daughter, a corporate lawyer who is now working with him. Their tension is part of the series’ emotional DNA. That the two don’t look as if they could be related will be addressed. 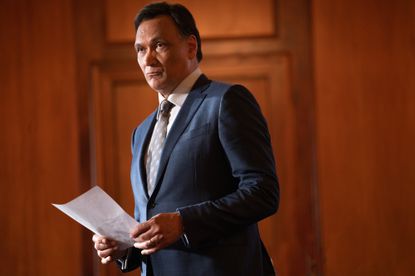 After shooting this pilot, Smits worked on the scheduled June 2020 film “In the Heights.” Though he’s been in movies — including a smaller role in the Star Wars’ franchise — and on Broadway — Smits is a TV star.

“It’s not surprising I wound up on TV,” he told the Daily News. “We weren’t a theater-going family or movies, except for Radio City Music Hall at Christmas and Easter.”

A devout Catholic, Smits finds a church wherever he is. Before making it as an actor, he worked in community action programs. As a co-founder of the National Hispanic Foundation for the Arts, he was delighted that a writer on the series was a beneficiary.

Smits leaves the restaurant above B.B. Kings Blues Club before some of the cast gather at a nearby bar. There, director Andy Wolk shared that he goes back decades with Smits.

“Jimmy was at Brooklyn College in a production of ‘The Tempest,' and I taught acting,” Wolk recalled. “He played Prospero, and you could see he had it. And I thought, ‘This guy is going places.'” 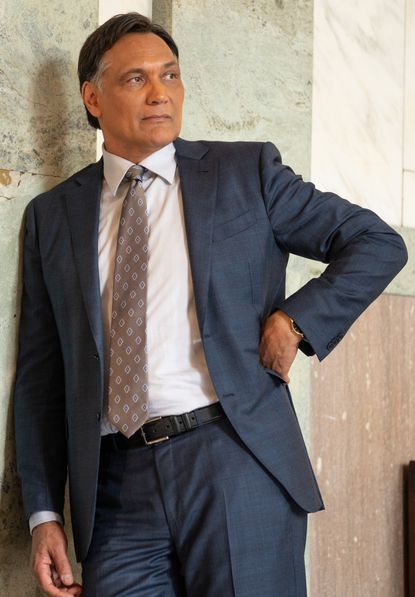 He still is. Smits wants to return to the theater and try behind-the-scenes work.

“I want to get more into the producorial side of the business,” Smits said. “What actor doesn’t want to direct? I am ready.”