It’s never too late to be a leading man. Just ask Richard Kind.

“People are not going to say, ‘Richard Kind is opening in a new movie? Call the babysitter,’” the character actor joked.

The Tony-nominated thespian is a familiar face to fans of 1990s sitcoms “Mad About You” and “Spin City.” Now at the age of 62, he’s the in the spotlight, with the lead in the dark romantic drama “Auggie.”

“I love my career. I’m the luckiest guy ever,” Kind laughed.

In “Auggie," Kind plays Felix Greystone, a man depressed after being forced into early retirement. His wife’s career and adult daughter’s life are blossoming, which isolates him further. For solace he turns to “Auggie," which are augmented reality “smart” glasses that react to people’s subconscious desires. Felix is befriended by an attractive, attentive young woman as the new technology tempts him down a tricky, twisted path.

“We all have Alexa and Siri so you wonder about what’s next,” the Second City alum said. “This is a very literate script. It’s like an elongated episode of “Black Mirror” but it’s very humane.”

Kind would love a role like Alan Rickman’s supervillain in “Die Hard," but TV and movie audiences seem to view him as the rumpled, messy essence of our humanity. “My eyes have a kindness and a vulnerability,” he explained.

Even after his performance in “Auggie” earned him an acting award at the Newport Beach Film Festival and the movie itself has been lauded, Kind is still pinching himself.

“It was shot in 12 days and is so low-budget it will take your breath away,” he said. “I never thought it would see the light of day. For it to get picked up by a company like Samuel Goldwyn for distribution, I’m still astounded.”

Any doubts aside, the Upper West Side denizen couldn’t pass up the part.

"In character roles I have an impact upon the action and the script but I don’t usually have an arc,” Kind said. “I’m in every scene in this and the movie is on my shoulders, that’s the challenge I usually don’t get.” 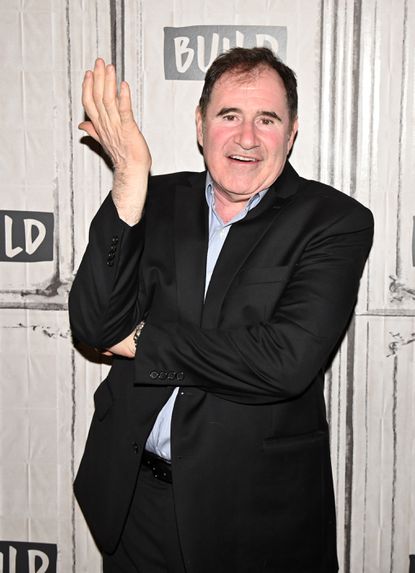 That’s not to say he hasn’t been memorable as Cousin Andy in “Curb Your Enthusiasm,” Max Bialystock in “The Producers” on Broadway or as Big Bong in Disney Pixar’s “Inside Out.”

“I’m like the Smuckers of acting — with a face like this I better be good,” Kind kidded.

It’s that expressive face that made him perfect for “Auggie," according to Matt Kane, who co-wrote and directed the film.

“He can do so much while saying so little.”

“We also wanted an actor whose character could make mistakes but have the audience stay on board with him,” says Marc Underhill, who co-wrote and produced the film. “I hope people will see Richard in a new light.”

Even they don’t, Kind will keep busy. This Thanksgiving, he returns as Mark Devanow in the reboot of “Mad About You.”