‘If you met Brian you fell in love with him instantly’: Friends, family, even a teen he once arrested mourn for fallen NYPD officer Mulkeen

NYPD officer Brian Mulkeen gave up his chance for a life of wealth because he wanted to do something much richer: serve and protect his city.

The 33-year-old left a plush job at Merrill Lynch nearly 10 years ago to patrol gritty streets as a member of the Bronx Borough Anti-Crime Unit.

He was doing the job he loved early Sunday when a chance encounter with an armed ex-con in the Bronx ended in unthinkable tragedy: Mulkeen was killed by friendly fire from other members of his unit trying to help him.

Those who knew him best say the 2008 Fordham graduate died a hero.

"He felt a calling to protect people, especially in those neighborhoods that needed it,” said Sgt. Daniel Tucker, a close friend of Mulkeen’s who works for the police in Salem, Mass.

“I don’t know too many people who would give up a big Wall St. money job to go take a huge pay cut and go to work and protect people in some of the worst neighborhoods around," said Tucker. “But that speaks to the character of who he was."

Tucker and Mulkeen bonded over music in college and stayed best friends. At parties, they would grab a guitar and annoy their friends by singing. Mulkeen’s go-to song was “Wild Horses,” by the Rolling Stones, Tucker said.

“When Brian would sing that song, we’d say the pitch of his voice always sounded too high for his Incredible Hulk-Superman frame,” Tucker recalled.

He was proud to see his friend land a job in finance — but said Mulkeen wasn’t satisfied for long.

“He said he was quitting his job and was going to be a police officer. He felt like he wasn’t doing enough with his life and wasn’t making enough of a difference ... (he) felt like he had more to give and had a lot more in him. He talked about how it was a calling and just how excited he was,” Tucker recalled.

On Saturday night, just hours before he died, Mulkeen intended to be at an award ceremony honoring his old Fordham University track coach, Tom Dewey. But as the night went on and Mulkeen found himself caught up in one NYPD job after another, he had to text his college buddy and tell him he wouldn’t make it.

When his old coach woke up the next day and saw the news, he was devastated, he said.

“He (Mulkeen) was going to come back and volunteer coach, he was probably going to start this week or next, and that obviously was cut short as well,” said Dewey. “His smile was as big as he was. He was just a great kid, he didn’t have to be motivated. He was self-motivated and I think he proved that when he became a New York City policeman.”

Mulkeen was known at Fordham for his giant build but his approachable spirit. Friends spoke about how he was always eager to help people grow.

“You see him from behind and you think, ‘Wow this is a tremendous guy,’ then he turns around and it was almost like a jolly smile. It’s like, alright I can go speak to this guy," said college friend Brian Horowitz. 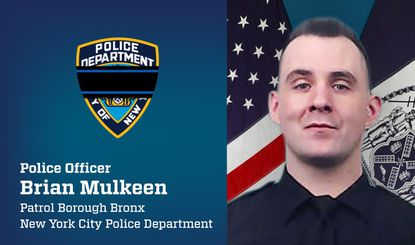 “He would wrap his arm around you and guide you through whatever you needed. If you met Brian you fell in love with him instantly. He had a tremendous work ethic, a huge heart, and was super-passionate about track and field and bettering people.”

During his six years with the force Mulkeen earned five NYPD medals and made 265 arrests, 155 of them felonies. He worked in the 48th Precinct before joining the plainclothes Bronx Anti-Crime Unit. The day before he died, Mulkeen pulled an illegal firearm off the streets when he nabbed a 27-year-old man armed with a Smith & Wesson .40-caliber revolver. 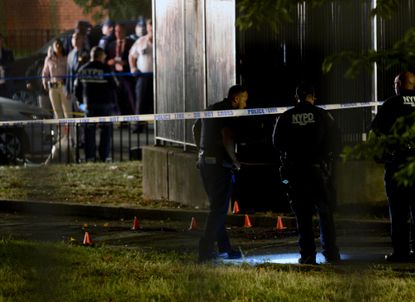 In his short time with the NYPD, Mulkeen’s impact was such that even one of his former collars grieved for him.

A teen that Mulkeen arrested in 2017 shared his reaction online Monday, noting that his mother burst into tears when she heard the officer died.

“He was the only officer that ... actually showed interest in my well-being, called my mom for a year to make sure I was staying out of trouble,” wrote the now 17-year-old.

“He was the real one and this is coming from somebody he arrested ... you will be missed, you were a real life good man doing good things for your community and just doing your job,” the youngster continued.

The boy’s mom, who only gave her name as Bianca, told the Daily News that Mulkeen checked in with her frequently to see if she needed help.

“When I found out what happened yesterday, it broke my heart,” she said. When she told Mulkeen she was struggling to handle her son as he went through a rebellious phase, the officer offered his guidance.

“He would tell my son, ‘Oh come here, there’s a court, we can play basketball,'” she recalled. “He was a kindhearted person who was very humble.” 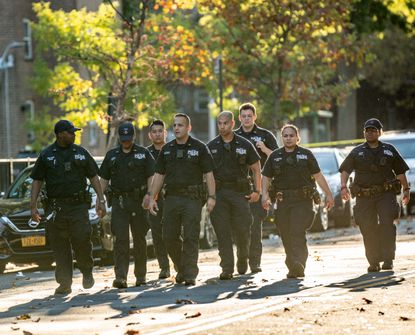