'He always sympathized with me ... he was a real life good man’: NYC teen arrested in 2017 by NYPD cop Brian Mulkeen grieves for fallen officer

Even a kid he collared is mourning for NYPD Officer Brian Mulkeen.

Two years ago, a then-15-year-old Bronx boy named Henry was getting into trouble — and his wayward path led him straight to Mulkeen.

“Officer Mulkeen arrested me in 2017 before and I’m not here to spread hate or harm I’m here to show my respect in my opinion .... he was one of the good guys," the teen, now 17, wrote in an emotional post Monday.

The young man, identified by his mother as Henry, said the officer kept in touch with him.

“Actually showed an interest in my well-being called my mom for a year to make sure I was staying out of trouble,” Henry wrote. "He was a real one and this is coming from somebody he arrested before.

“You will be missed, you were a real life good man doing a good thing for your community,” the teen grieved.

His mom, who only gave her name as Bianca, said she cried when she heard the NYPD officer killed early Sunday by friendly fire in the Bronx was Mulkeen.

“He was a really good officer, he was one of them that really cared,” Henry’s mom told the Daily News. “When I explained to him my whole situation, that my son was at a stage where he was being very rebellious, he sympathized with my situation and offered to help and offered to give my son guidance.”

Mulkeen never wavered in his goal of getting Henry back onto the straight and narrow, she added.

“He would check up on us from time to time just to make sure my son was out of trouble. When I found out what happened yesterday, it broke my heart. He was a kind-hearted person who was very humble," the grateful mother said. 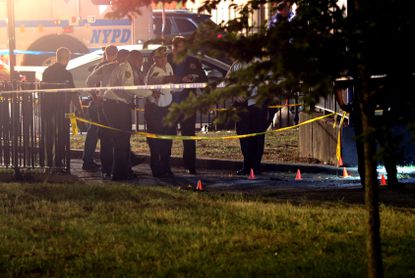 Mulkeen made sure to get her phone number when she came to pick up her son at the police precinct, she said.

She described Mulkeen as caring and passionate about his job.

He would tell my son, ‘Oh come here, there’s a court, we can play basketball. The guys, the officers, are always willing to play basketball with the kids.'” 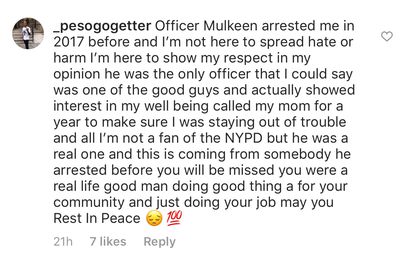 Henry was arrested as a juvenile three times, for assault and stolen property, two of them in the 48th Precinct when Mulkeen worked there on patrol, police sources said.

“Even my last arrest in July he seen me in (the 46th Precinct) and asked if I was okay and what was going on,” the teen wrote. “R.I.P idgaf what nobody say not all of em is bad guys they be tryna work with you this s--t got my mom in tears too s--t wicked."