So what if the infamous gangster’s been dead for 51 years? Johnson remains captivating, as depicted in “The Godfather of Harlem” premiering Sept. 29 on Epix.

Forest Whitaker plays the crime boss who fights the Mafia in a bloody war to control drugs and the numbers racket in Harlem. He seethes with controlled rage, which when uncorked tends to be fatal for those who cross him.

“I was walking a line of restraint, and the things are so volatile that I am dealing with,” Whitaker said. “You try to balance this somewhat insane violence. It’s always a challenge to play somebody legendary.”

He and Giancarlo Esposito, as the Rev. Adam Clayton Powell Jr., who long represented Harlem in Congress, meet the challenge.

“For an actor, playing a historical character is undeniably harder than playing a character written for you,” Esposito said. “And I have to live up to the standard for this human being. This guy was flamboyant and fun, yet he wanted to be equal and intelligent.”

As a fellow sharp dresser — Esposito was wearing a plum-colored suit when talking about this project — he appreciates Powell’s sartorial splendor. Though the actor initially had several mustaches made for the role, he grew the sort that looks sharp enough to cut metal.

Esposito, who moved from Italy at 5 and lived around Manhattan — his mom sang at The Apollo and was a waitress at ThomForde’s, the former soda fountain on 125th St. — recalls becoming aware of Powell.

“I first saw his photo in the Amsterdam News,” he said. “This dude looked the way I wanted to look. Once he opened his mouth, he carried himself with such grace.

“I grew up on Hamilton Terrace in Harlem and about two years ago moved into my childhood apartment,” Hadera said. “And when I was reading Mayme’s book — it doesn’t get more wild-zany than this — there is a chapter where she talks about Miss Cunningham, the nice older lady on the sixth floor, who used to let my brother and I raid her candy dish. I read that and put the pieces together, and I texted my mom.

“That is goosebumps,” Hadera said. "It is more than coincidence.” In the opening scenes of the 10-hour series, Bumpy is sprung from Alcatraz after serving 11 years for selling heroin. It’s 1963 and Mayme fills him in on changes in Harlem and what’s stayed the same, such as The Apollo — which will host the premiere of the series on Monday night.

Whitaker, also a producer, acknowledges he pitched other networks before Epix bought it at their first meeting.

Michael Wright, president of the premium cable network, explained that “‘The Godfather of Harlem’ is emblematic of the kind of story that might have been a film. How great that we can take it and tell it across 10, 20, 30 or 40 hours,” he said, hinting at, but not confirming, future seasons.

“It is a level of storytelling and a level of performance now happening on television.”

The period piece nails Harlem of the 1960s, from fashions to cars. Some familiar faces show up as Mafia bosses: Paul Sorvino as Frank Costello, Chazz Palminteri as Joe Bonanno, and Vincent D’Onofrio as Vincent “The Chin” Gigante.

A couple of plots stretch belief, including a kidnapping and Gigante’s daughter involved with a black musician. They stand a chance of making “Romeo and Juliet” look like a happy ending.

In a scene reminiscent of the wedding of Don Corleone’s daughter in “The Godfather,” everyone who sees Bumpy at his welcome home party wants something from him. Bumpy takes care of the children whose fathers were slain fighting for him.

There’s a gentleness about this OG, most apparent when he’s with his children. His adult daughter is a street junkie; he and Mayme raise her girl as theirs.

Ironically, Bumpy argues about heroin with Malcolm X (Nigél Thatch, again playing the leader as he did in “Selma”). Bumpy considers smack just another commodity while Malcolm X understands its tenacious misery and establishes a clinic for addicts to detox.

“I hope people look at some of the social messages about what the opiate crisis is doing to the country right now,” he said. “And I hope they will think about the human rights issues and be more tolerant of differences. People are just reaching for their little piece of the pie. As Martin Luther King used to say, ‘We have not gotten there yet.’ And this show is dealing with that.” 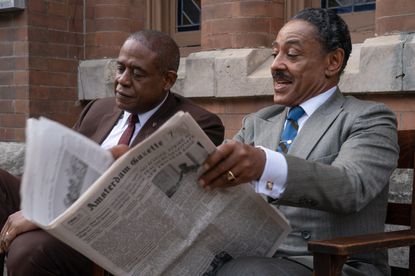