Funny first: Creators of new immigration sitcom `Sunnyside’ say its all about the laughs

“The show can mean different things to different people but my hope was just to tell funny jokes and write funny characters,” told the Daily News.

But even Penn can’t get around the fact that his new show, ”Sunnyside,” airing Thursday, is set in President Trump’s home borough, and will air on the network where Trump achieved his reality TV fame.

Penn, best known for his three big screen turns as Kumar in the “Harold and Kumar” stoner series, stars as Garrett Modi, a former Queens councilman who has suffered a very public fall from grace thanks to a viral video of drunken and boorish behavior.

Alienated from virtually everyone and with no other job skills, Modi finds himself by helping immigrants in his historically-diverse home district of Sunnyside as they navigate the process of becoming American citizens.

Diana-Maria Riva, who plays Griselda, a Dominican immigrant who survives by holding down countless jobs, said immigration is just a backdrop.

Riva, a first-generation Dominican, is one of five immigrant actors starring in the show.

Showrunner Matt Murray said presenting immigrants as hard workers striving to make good America is not meant as a political point. But it would not disappoint him if “Sunnyside” does for immigrants what “Will & Grace” and “Modern Family” did for the gay community. Murray said those shows changed attitudes about gay people “simply by being in people’s living rooms every week and having people think, ‘Oh, I like them.’”

The idea for “Sunnyside” was actually born five years ago when Penn’s manager asked him about his dream project.

“I love New York stories and I know its kind of cheesy but I love optimistic comedies,” Penn explained. “I grew up with `Head of the Class’ and `Fresh Prince.’ And I love America too.”

He explored the idea of perhaps a teacher leading a civics or citizenship class, then put it aside to act in “Designated Survivor.” Before that, Penn took a two-year sabbatical from the entertainment industry to work in the Office of Public Engagement for the Obama administration.

Murray tweaked the concept to focus on the disgraced council member.

“It’s about a guy for whom everything came easy and when it is all taken away he has to reexamine his own life,” Murray said.

But not every episode is about citizenship. Some shows will feature “friends helping each other through silly situations in New York City,” he told The News.

Penn’s off-beat sensibility is evident in a backstory added for the show’s wealthy twins. They filled the roles with Poppy Liu, who is Chinese, and Joel Kim Booster, who is Korean. Penn can’t stand when people say Asians look the same, so they decided to “lean into this and be truthful and bizarre. They turn out to be ‘half-twins,’ born at the same time from the same dad to different moms.”

He hopes it’s that kind of absurd humor, not political content that draws audiences.

“After Harold & Kumar Escape from Guantanamo Bay opened, a senior staffer for George Bush told me he thought the movie was hilarious,” Penn recalled. “That’s the kind of inclusive sense of humor we’re hoping to achieve with Sunnyside.” 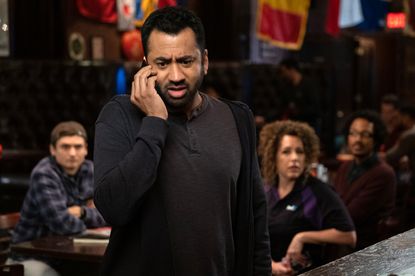