Angelita Mendez, only five days after celebrating her 48th wedding anniversary, nursed a broken heart as she planned her husband’s funeral.

“I miss him so much,” said the 72-year-old widow, turning emotional Saturday at the mention of spouse Juan Mendez’s shocking death in a Brooklyn accident. The loving couple met in their native Philippines in 1967, wed three years later, and remained together for the next five decades.

Angelita was surrounded by family members as they watched a slideshow of wedding photos from her 1971 nuptials to the man known as “Papa Johnny.” The family patriarch, a former lieutenant commander in the Philippine Navy, had long appeared invincible to his beloved wife, three children and seven grandkids.

“We thought he was like Iron Man,” said granddaughter Merryl Ugalde, 21, sitting in the family’s Queens home. “He got through everything. He had accidents before, but he got through it. He was in the military, and he got through that.”

The questioning hanging over the house now was how the Mendez family could survive the loss of their rock, who will be returned to his native land for burial.

“We remember, and we start crying," said Merryl. 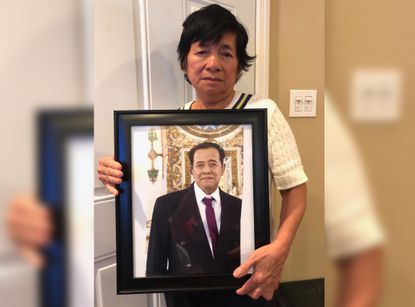 Security guard Mendez, 72, was working a 3 p.m.-11 p.m. shift Thursday outside a Time Warner Spectrum building when the driver of a Ford Explorer lost control while making a turn, slamming into the booth where the victim was standing. The employee of Allied Universal Security died at Bellevue Hospital after suffering horrific injuries to his legs.

The driver stopped at the crash scene on Paidge Ave. in Greenpoint, with no charges brought in the fatal crash.

Angelita, who typically spoke with her husband throughout his two-hour commute back and forth from work, woke up from a sound sleep around 11:45 p.m. and wondered why she hadn’t heard from Juan . When she dialed his phone, a nurse answered with the bad news that Juan was critically injured. The family was told things took a sudden turn for the worse, and Mendez was pronounced dead.

“I’m shocked,” said daughter Marlie Ugalde, 35. “Because when we arrive at the hospital, it’s already done. My dad is already gone.”

Juan Mendez came to the U.S. just five years ago, planning to retire before landing the security job. In addition to his time in the service, Mendez worked as a telecommunications engineer in Saudi Arabia.

The family remembered him as devoted, exceptionally organized, strict but selfless — and one of his last acts provided the perfect illustration.

Juan renewed his driver’s license shortly before his death and decided to become an organ donor. His eyes were retrieved on Friday by doctors, with two transplant recipients expected to benefit from his parting gift.