Despite three arrests while on parole, ex-con was free to commit horrific rape in Queens, say police

A parolee carried out a horrific rape in which he gave his victim an incredibly cruel choice: Have sex with her son, or have sex with him, police sources told the Daily News.

Accused rapist Joshua Henderson, 33, should have been locked up when he assaulted the woman in her Queens home on Monday, said outraged cops.

He’d been arrested three times on burglary and other charges after his parole in July 2018 after serving nine years of a maximum 12-year sentence for burglary.

He wore an electronic monitoring ankle bracelet during the brutal attack Monday — and the bracelet’s tracking device put him at the scene of the rape, prosecutors said.

State parole officials say that after Henderson’s arrests, they tried twice to return him to prison — but that an administrative law judge kept them from revoking his parole.

A parole official said the agency was "unsuccessful in court due to circumstances outside the control of [parole].” 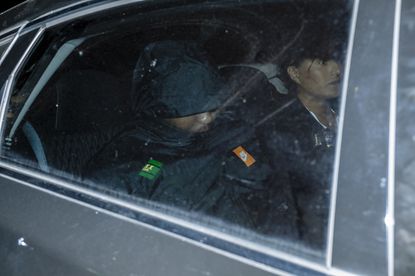 Henderson allegedly wore a yellow vest to pose as a construction worker at about 6 p.m. Monday when he knocked on the door of an apartment in the 106th Precinct in Queens, which includes Howard Beach and Ozone Park, police said.

It might have been an attempt to case the apartment but the victim, who answered the door, managed to end the conversation after a short time and shut the door, police said.

The woman was in her home with one of her sons. Her other son, a teen who has special needs, was not home.

Police said Henderson convinced the woman he had a gun. After giving his horrifying ultimatum, he tied up the son, 25, in another room with wire and an extension cord from a fan and a light, and raped the woman, authorities say.

The suspect then used soapy water and sprayed the victim to try to clean up DNA evidence of the attack, prosecutors allege.

Henderson is accused of taking jewelry, money and other valuables before he fled.

Henderson was arrested Wednesday on rape, robbery and other charges. The victim identified him from a photo array and a lineup, and he was caught on surveillance video, prosecutors said Thursday.

Henderson — clad in a Nike windbreaker with the words "Just Do It " in large letters on the back — mouthed “I love you” to his wife and teenage son during his arraignment in Queens criminal Court Thursday night.

The suspect’s wife spoke in his defense.

“How could they do this to him? He didn’t do anything. He has three kids and a wife at home,” said Joanna Henderson, 37, weeping as she spoke.

Henderson’s criminal career dates to at least a decade ago, when he was busted for burglarizing six homes in Brooklyn and another in Queens. Henderson served 9 years in prison upstate, and was paroled in July 2018.

While on parole, Henderson reverted to his old ways, prosecutors say. He was busted November 15 in an Upper East Side burglary, and also faces in Manhattan Supreme Court a raft of charges that include fraudulent credit card use and identity theft.

After the November arrest, the Manhattan DA’s office sought $500,000 bail.

But a Manhattan judge set the bail at $100,000, which a bondsman posted six weeks later. As a condition of bail, Henderson was outfitted with an electronic monitoring bracelet.

About a month after his release on the burglary charge, on Jan. 17, Henderson was arrested again, this time for allegedly trying to buy items from an Apple kiosk at Macys Herald Square with three credit cards stolen from a home in Brooklyn.

The DA’s office wanted $25,000 bail but it was set at $5,000 — apparently because the alleged crimes happened in August 2018, before the Manhattan arrest.

Henderson made that bail, but couldn’t stay out of trouble. He was arrested yet again in May in Brooklyn for playing dice. That case was adjourned contemplating dismissal at arraignment, likely without his prior arrests being mentioned.

Parole officials said the dice game bust by itself did not merit a violation.

Henderson made no statements to police when he was picked up Wednesday at the office of his bail bondsman. The bail bondsman could not be reached for comment.

Sources said Henderson is eyed in a number of open rape cases and unsolved burglaries.