Port Authority police and federal authorities have busted a Delta Airlines ramp worker they say swiped a bag containing $300,000 about to be flown to Florida — then called in sick, law enforcement sources said Thursday.

The bag of money, which belonged to an armored car company, was stolen from a Delta Airlines plane on Tuesday but wasn’t reported missing until the plane landed in Miami, sources said.

Based on information provided by the Port Authority police, federal authorities immediately began questioning the Delta Airlines crew that worked on the plane.

Ramp worker Quincy Thorpe immediately became a immediate suspect after he called in sick the next two days, sources said.

The FBI arrested Thorpe at his home late Wednesday. He was charged with grand larceny.

The money has not been recovered.

Thorpe was released on $80,000 bond after his arraignment in Brooklyn Federal Court Thursday afternoon.

His lawyer, Lonnie Hart, said the father of one claims to have absolutely no knowledge of what happened to the bag.

The lawyer said he intends to prove Thorpe was diagnosed with an unnamed illness the day he called in sick.

“He’s a good guy and I just don’t believe he did this," Hart said. 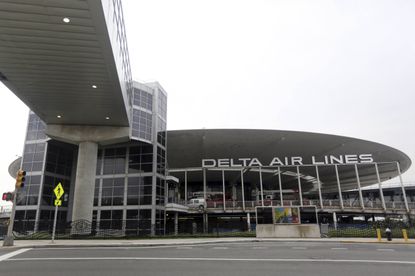 Delta in a statement said the accusations against Thorpe were troubling.

“We are taking this situation very seriously and working directly with authorities on their investigation as well as conducting an internal investigation of our own,” a spokeswoman said.