A two-year-old boy died after falling from a sixth-story window in Brooklyn on Monday, officials said.

La-Reese Williams Jr. fell from the building on Eldert Lane near Linden Blvd. in East New York about 10:30 a.m.

The parents had been distracted in the apartment before the child fell, said a cop source.

Police were looking into reports that the family was arguing in the next room.

Neighbors also told cops an air conditioning unit was pulled from the window shortly before the incident.

"The father had removed the air conditioner from the window, and the baby crawled out, " said a neighbor. 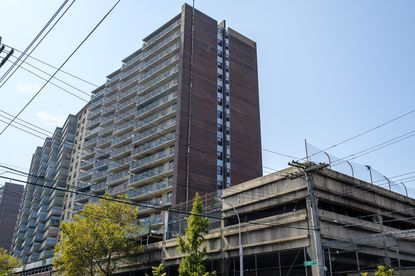 The family realized what happened when they heard neighbors screaming outside.

The baby’s shattered body lay on the concrete in the interior courtyard of the complex, cops said.

Medics rushed the boy to Brookdale University Hospital but he could not be saved.

Assemblyman Charles Barron (D-Brooklyn) came to the scene to visit the family.

Family members, including the father, who shares the same name as his son, brushed past reporters at the scene.

“We’re not in a good state of mind right now,” said an uncle of the dead boy.

Police Monday afternoon were interviewing the parents. There were no immediate arrests.

Cops were leaving the possibility of charges to the Brooklyn District Attorney’s office, police sources said.