It would be foolish to group all of Bill Skarsgård’s villainous characters with Pennywise the clown.

Sure, the actor behind the creepy makeup in the “It” movies has played his share of bad guys in recent years, but his latest role is unlike any of the others.

In the upcoming horror comedy “Villains,” Skarsgård stars as Mickey, an amateur robber who gets more than he bargained for when he and his girlfriend, Jules, stumble upon a pair of maniacs and their dark secret.

“It’s more ambiguous. Pennywise is not morally questionable," he said with a laugh. "There’s some characters where you absolutely play a villain.”

In “Villains,” which hits theaters Friday, Mickey and Jules are on the run after holding up a gas station when their car runs out of fuel on an isolated road.

Desperate to find another means of transportation, they break into a nearby home and find a little girl chained up in the basement. Mickey and Jules are ultimately held there against their wills, as well, after coming face-to-face with the home’s owners, George and Gloria.

“George and Gloria are not morally questionable,” Skarsgård said. “They’re murderers and psychopaths, whereas Mickey and Jules are definitely not that. They’re morally questionable in the sense that they’re criminals, but their heart is in the right place.”

“Villains” co-directors Dan Berk and Robert Olsen came up with the Mickey character without a specific actor in mind, but knew they wanted someone lanky and with the smoothness of a dancer — who also had humor and charm.

“When Bill was initially brought up to us, our first thought was, ‘Well, talk about fitting the physical profile; he’s perfect,’ " Olsen told The News. "But have we ever seen him do something like this? Can he be funny like this? ... We Skyped with him and just kind of realized, holy s--t, he is charismatic. If you ever sit down and have a drink with him, he’s just such an engaging, funny, animated storyteller. 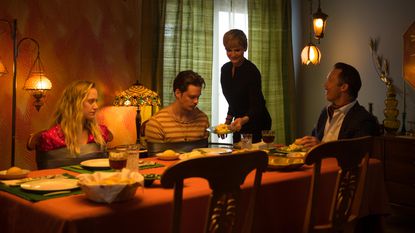 “I think you do see a lot of that in 'It.’ I do think that Pennywise is quite funny in that movie, but it’s just a different thing. There’s so much makeup and all that stuff, it’s not like that person. Bill himself is just so much fun to watch," Olsen said.

Skarsgård was the first to join a cast that also includes Maika Monroe as Jules, Jeffrey Donovan as George and Kyra Sedgwick as Gloria.

The indie flick premiered in March at the South By Southwest festival in Austin, Texas, to rave reviews, and the filmmakers are hopeful it will succeed at the box office, too, so more movies like it can be made.

“We always pitch the movie on the merits,” Berk said. “Like, you’ll have an incredible time seeing this with an audience. There’s nothing better than watching white-knuckle tension sequences or comedy with a group, and that’s what this film is.” “I’ve never had a particular type that I’m like, ‘You know what? Moral ambiguity, that’s what I want to do.' Or whatever," Skarsgård said. “When a role speaks to you and you can access something, like, ‘Oh, I can tell this story this way and I understand this character,’ that is sort of what motivates me to take on a project.”