Mayor de Blasio insists he’s not the Don Quixote of the Democratic party as he pushes on with a White House campaign that is stuck in neutral — or even rolling in reverse.

Despite an endless stream of bad news, de Blasio refuses to pull the plug on a laughingstock campaign that rarely cracks 0% in polls and is dogged by unfavorability numbers that are actually rising as he introduces himself to the nation.

Stronger candidates such as Sen. Kirsten Gillibrand (D-N.Y.) have already accepted reality and dropped out.

But Hizzoner was back in South Carolina on Saturday schmoozing with black voters at a soul food restaurant and a church service in hopes of gaining traction in the third-in-the-nation primary state.

The mayor is set to appear alongside other Democrats at a town hall event Sunday at the University of South Carolina.

De Blasio missed the latest debate on Thursday and was reduced to the humiliating position of live-tweeting the contest from Gracie Mansion while the real contenders were sparring on national TV. Most of his tweets barely broke double figures in likes.

Some 53% of voters had an unfavorable opinion of de Blasio in the most recent Economist/You Gov poll conducted from Sept. 1-3, compared to just 18% who view him favorably, a brutal minus-35% rating. He’s running at 0.5% in the Real Clear Politics average of polls, putting him in a distant 16th place in the crowded field.

He’s going slightly better in South Carolina, drawing 1% support and coming in seventh place in a CBS poll of Democrats in the Palmetto State that was taken over the week ending Sept. 4.

After four months of greeting voters at South Carolina fish fries and gobbling down corndogs in Iowa, he is nowhere remotely close to meeting the polling and donation numbers he needs to crash October’s debate party.

For anyone else, that would be a bright, flashing sign to head for the exits, especially when your day job is running the biggest city in the country.

But not for de Blasio.

Hizzoner went on WNYC Friday to insist that it’s still early in the White House race and there’s plenty of time for him to make his move. 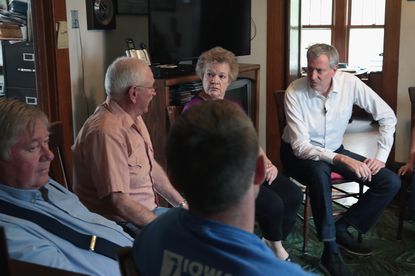 The mayor said his recent proposals — including a “robot tax” as part of a plan to protect workers from automation — “got some good attention.” The issue hasn’t gotten a peep from other candidates and isn’t even included on surveys of top issues.

His campaign still thinks there is room in the Democratic primary contest for an unapologetic progressive with a proven track record of winning African-American and Hispanic votes.

They also tout de Blasio as an effective street fighter who is not afraid to get into the mud and trade barbs with President Trump. In fact, one of de Blasio’s prime selling points is that Trump and his acolytes regularly single him out for abuse. That’s a sign, or so they claim, that the president secretly fears a 2020 match-up with de Blasio.

Sounds like a competitive candidate, right? Except he’s not.

De Blasio’s had four months to make his case. And the more he campaigns, the worse his numbers get.

New Yorkers gave him a big Bronx cheer when he announced his run in May, with large majorities of even his own supporters saying he should stick to his Gracie Mansion gig and leave the White House run to the professionals.

Since then, his disapproval numbers have only soared.

In the flyover states that will actually determine the Democratic nominee, most know de Blasio as a punchline on late-night TV. His biggest breakthrough media performances have come on conservative Fox News, where Sean Hannity and Tucker Carlson both used him as a useful set-up line for their shilling for Trump and attacks on Democratic leaders such as Joe Biden and Elizabeth Warren.

To make the next debate, De Blasio needs to score at least 2% in four separate national or early-state polls and grab 130,000 unique donors and 400 individual contributors per state in at least 20 states by Oct. 1.

The mayor and his team did not returns requests for comment.

De Blasio has refused to detail his fund-raising progress since June 30, when the most recent federal campaign filing period ended. By the end of June, the mayor raised $1.1 million from roughly 6,700 donors.