A serial bank robber mistakenly released from the Metropolitan Correctional Center in August was sentenced Friday to nearly 20 years for committing four more bank robberies while on the lam last year.

Judge Dora Irizarry told 58-year-old Michael Matthews — who was erroneously let out of MCC just days before Jeffrey Epstein hanged himself at the same facility — that he had not learned his lesson.

“You engaged in another robbery spree while on escape status,” Irizarry said. "In order for the public to be protected, you need to be incapacitated.”

Matthews was supposed to report to a Brooklyn halfway house in September 2018 after his release from a federal facility in New Jersey where he was serving time on unrelated bank robbery charges.

At the Citibank, Matthews placed the knife near the spine of a bank teller, demanding cash and threatening to take her life, Irizarry said.

Upon fleeing the scene, he broke the arm of an off-duty correction officer who tried to apprehend him, prosecutors charged.

Matthews was re-arrested Oct. 12 and pleaded guilty in May to two counts of bank robbery. He was in MCC waiting to be sentenced when officials there let him go — a mistake first reported by the Daily News.

He surrendered to authorities after realizing they’d made a mistake.

“I’m sorry for my actions,” Matthews said through tears, blaming behavior on his history of drug use. “I never meant to harm anyone ... to intimidate anyone to the point (that) they were afraid.”

“There’s still some good in me," he said. 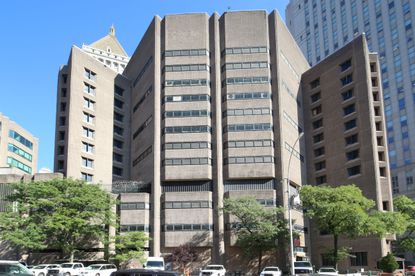