At screening of ‘The Irishman,’ Martin Scorsese says it was good to finally snag Al Pacino – who’s starring with Robert De Niro and Joe Pesci

The director and actor, both cinematic titans and Oscar winners, met in 1970, and Scorsese had hoped for decades to cast Pacino.

“Francis Coppola introduced us,” Scorsese said Friday during a press conference at Manhattan’s Lincoln Center. “Over the years, it just went differently.”

But finally their paths came together — with Robert De Niro and Joe Pesci, to boot — in “The Irishman,” which was screened Friday at Lincoln Center, followed by a press conference with the director and stars, ahead of its premiere at the New York Film Festival.

The highly anticipated mob drama reunited Scorsese with De Niro and Pesci for their first feature film together since 1995’s “Casino.” And Pacino was glad to come aboard as the bombastic former union leader Jimmy Hoffa, whose disappearance in 1975 remains unsolved.

The 79-year-old Pacino — whose many iconic roles include the “Godfather” movies, “Scarface” and his Oscar-winning turn in “Scent of a Woman” — remembers Hoffa’s real-life prominence well and enjoyed the challenge of portraying him.

“Today’s world, you have a lot of access to those kinds of characters with a lot of people who know them or knew them and also there’s books about them,” Pacino said at Friday’s event. “Mainly, there’s footage about them.”

“The Irishman" centers on De Niro’s character Frank Sheeran, a hitman of Irish descent who involves himself with Hoffa and with the infamous Bufalino crime family. 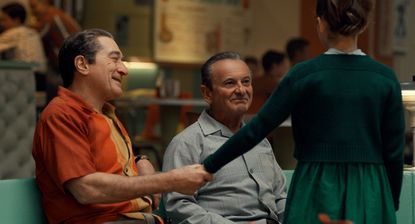 De Niro, 76, first had early discussions about possibly making the movie with Scorsese about 10 years ago, mentioning to the director the memoir the film is based on, investigator Charles Brandt’s “I Heard You Paint Houses.”

“When Bob presented the book to me, I could see he was very strongly attached to the character,” Scorsese recalled. “We didn’t have to say much.”

The duo, whose other classic movies together include “Raging Bull” and “Taxi Driver,” had discussed a reunion for years, and were eager to team up again with Pesci, 76, with whom they also worked on “Goodfellas.”

“Those opportunities passed, but we always did (want to)," De Niro said at the press conference. "Joe and I would talk about the movie, too. I would talk to Marty, and I would talk to Joe. We went through a long process talking about it, as far as all that goes. But I’m just happy we all got ... to do it, because it did take a long time.”

Scorsese reflected Friday on the issues they faced to find the necessary financial support to make the movie, before Netflix stepped in. Production included 108 days of filming across 117 locations for a total of 309 scenes and involved them using high-tech de-aging technology to make the actors look younger for certain scenes, as the movie spans multiple decades. The film runs 3 hours and 30 minutes.

Pesci plays Russell Bufalino, who takes Sheeran under his wing as he dives head first into a life of crime.

The actor quipped Friday of Scorsese, “I just do whatever he tells me.“

Pacino joined “The Irishman” after the movie had already begun production, but says he never felt like an “outsider” despite entering late for a film that also stars Harvey Keitel, Ray Romano and Bobby Cannavale.

“I was coming on with people I really know and care about. … It was good to do that, because I don’t know if I could have done it without these people, because they made it comfortable,” Pacino said.

“The Irishman" opens in select theaters on Nov. 1 before premiering on Netflix on Nov. 27.