Ansel Elgort’s new movie “The Goldfinch” is a nuanced story that couldn’t be painted with a broad brush.

So shortly after the Manhattan-born actor signed on to play Theo Decker ? the troubled protagonist who swipes one of his mom’s favorite paintings from the ruins of the Metropolitan Museum of Art after a bombing there kills her ? the actor read the Pulitzer-Prize-winning novel the film is based on to get a better grasp on the character.

“The trauma built up on Theo is really great," Elgort, 25, told the Daily News. “There’s years and years and years of guilt, and he doesn’t know what to do about this painting that he has and has kept out of the light for this long. He knows it’s wrong, but he can’t let it go because it feels like he’s holding on to his mother still. Even though he’s lost her, he hasn’t completely lost her. There’s something left that he can really actually hold on to.”

Elgort, who earned a best actor Golden Globe nomination for his role as a heist gang’s wheel man in 2017's “Baby Driver,” is also known for playing a cancer patient in "The Fault in Our Stars” and a dystopian hero in the “Divergent” series.

The piece of art at the center of his latest film is The Goldfinch, a 1654 oil painting by Dutch artist Carel Fabritius of a tiny bird chained by its foot to a perch. In the movie opening Friday, Theo is 13 at the time of the explosion and survives the blast that kills his mom.

The tragedy changes the course of Theo’s life. He’s driven to art forgery while secretly hiding The Goldfinch painting for years when the rest of the world thinks the masterpiece was destroyed in the bombing.

Elgort portrays an adult version of Theo, who moves from home to home as a teen after losing his mom and lives at different points with characters played by Nicole Kidman, Jeffrey Wright and Luke Wilson as his deadbeat dad.

“I felt like a lot of people were really moved by the story, so that was great,” Elgort told The News a day after the movie premiered at the Toronto International Film Festival. “There was such a big concern whether or not you could make a movie out of a book like that, and (at the premiere) I really felt that the movie was its own, nice piece of art that will make you feel things. That’s the most important thing to me with art, is that it makes you feel something.”

The 784-page novel by Donna Tartt (also titled “The Goldfinch") came out in 2013 and scored the Pulitzer for fiction a year later. Theo narrates both the book and the movie directed by John Crowley. 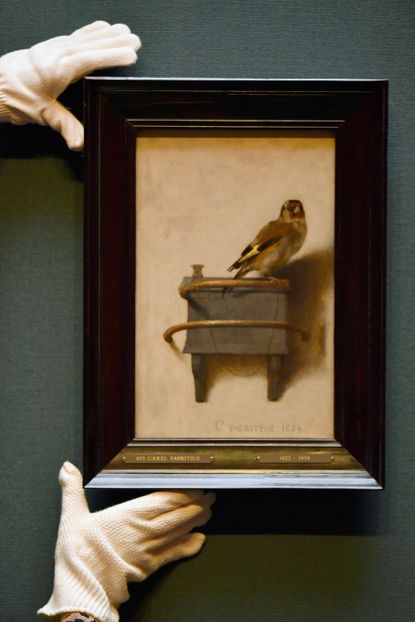 Elgort says reading the book “really helped” him prepare for the lead role.

Elgort, whose parents are famed fashion photographer Arthur Elgort and stage director and producer Grethe Barrett Holby, believes there’s a lot to take from the movie, including the importance of cherishing relationships and the impact of art.

“The art we make could last forever, and express who we are and who we’ve been and let us know that we haven’t changed that much," Elgort said. "The Goldfinch was painted in the 1600s, and it’s still a relevant piece of art now.”

The actual painting currently resides at the Mauritshuis museum in the Netherlands.

The movie also pays homage to the relationships between mothers and their children.

“I was sitting next to my mom (at the premiere)," Elgort said. "At the end when we embraced, it felt so good and I really appreciated her being there, and having a mother, especially a mother who’s been so great my whole life. So actually I think this was a good film, even if it’s hard at times, to see with your mother. That in itself made it really special for me.”