‘A little punk!’ Residents of Bed-Stuy brownstone Tekashi69 called 9 Trey clubhouse are not fans of the rapper

Tekashi69 has lost his fanbase at the Brooklyn brownstone that helped make him famous.

At the home on Madison St., which Tekashi said served as a clubhouse for the Nine Trey Bloods, a woman called the rapper “a little punk."

“They need to give him some time, I’ll say that,” said the woman who appeared in one of Tekashi’s rowdy music videos.

The brownstone is central to Tekashi’s transformation from a Bushwick kid working at a deli to a rapping gangbanger who betrayed the Nine Trey Bloods who made him famous. During three days on the stand in Manhattan Federal Court, Tekashi, whose real name is Daniel Hernandez, recalled that in September 2017 he asked a friend in the gang to get other members to appear in his first music video, “GUMMO.”

“Red is what a Blood member would wear, so I want the video to be full of red. So, before the video shoot I went to go buy over 3,000 red bandanas,” Tekashi said.

Tekashi met Kifano “Shotti” Jordan, at the Madison St. home, the second-in-command of Nine Trey who would become the rapper’s manager. The video, which features stacks of cash, bags of weed and Nine Trey associates flashing real guns at the camera, was an instant hit. It now has 357 million views on YouTube.

Under oath, Tekashi recalled his conversation with Jordan.

“This little n---a knows what he’s doing. I thought all that rainbow hair s--t was — you know, he was bugging for that — but he know what he’s doing. Tell him to stay in touch,” Tekashi testified that Jordan said, starting a mutually beneficial arrangement for the rapper and the gang.

Tekashi testified that he met Aljermiah “Nuke” Mack, who is accused of dealing heroin for Nine Trey, at the house. Tekashi also claimed he crossed paths with the accused gang member on trial, Anthony “Harv” Ellison, at the brownstone.

He estimated he paid $85,000 to Jordan and Ellison before the gang fell into rival factions. Testimony during the trial that concluded Thursday revealed that Jordan saw Tekashi as an invaluable source of revenue and Ellison saw Tekashi as a poser who was all talk. “Stop picking and choosing when you wanna be gangster," he texted the rapper. 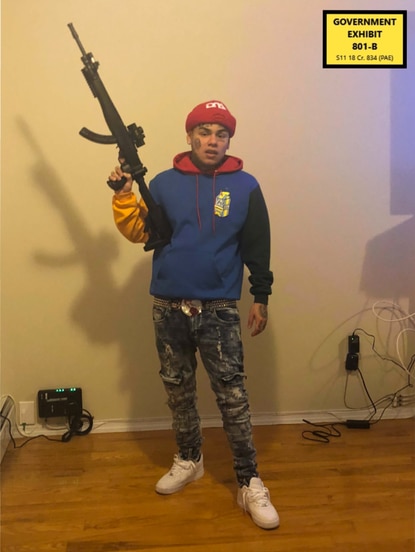 The fallout came to a head when Ellison allegedly kidnapped and robbed Tekashi at gunpoint at Atlantic and Bedford Aves. in July 2018.

Ellison’s attorney Deveraux Cannick has argued that the kidnapping was a stunt meant to promote Tekashi, a self-proclaimed troll who constantly talked trash and invited trouble.

“The defense is that it was a hoax. People who don’t know him don’t know how much of a possibility, like a high-strung possibility that is, you know? Would somebody actually go that far? Yeah, he would go that far,” said a man at the Madison St. brownstone who was involved in Tekashi’s rap career.

"From the outside looking in, it’s like ‘Oh, these gang members, they’re extorting him.’ But to me from my perspective, it’s the other way around. Because he’s just dragging everybody into hell. Everybody’s going to jail.”

Both the man and woman spoke on the condition they not be named. They suspected a Daily News reporter was an undercover cop.

Even customers at Stay Fresh Grill and Deli, where Tekashi made breakfast sandwiches in 2014 before hitting it big, declined to give their names. One customer said that Tekashi put together a “pretty good” sandwich, but nothing special.

“He was pretty cool, even when he started getting famous he used to stop and talk to people. He’s a cool person. We have a good perspective on him here,” the patron said.

“He didn’t even have no tattoos when he worked here,” the man said, adding that Hernandez did have his signature rainbow hair.

"He wasn’t a guy that was looking for problems.” 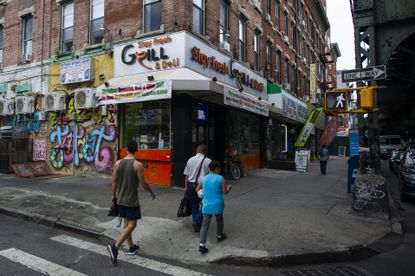 Tekashi has been in custody since November. He’s pleaded guilty to racketeering charges carrying a minimum of 47 years in prison, though he’s expected to get much less through his cooperation. A jury will begin deliberations regarding Mack and Ellison on Wednesday.