A completely different person from before, Eddie Murphy now says ‘Raw’ routine was ‘a bit much’

Hindsight is 2020 — especially for Eddie Murphy, who is now admitting that his raunchy stand-up comedy routine from 30 years ago was a “bit much.”

“I was a young guy processing a broken heart, you know, kind of an asshole,” he said of “Raw” — his groundbreaking 1987 comedy special released in movie theaters that grossed $50 million — in an interview with The New York Times, published Thursday.

The Brooklyn-born funnyman said looking at “Raw” makes him cringe. “That’s a bit much, my goodness,” he quipped, mimicking himself watching the old stand-up set — which included homophobic jokes alongside bits on sexually transmitted infections, divorce and defecation. “My word,” he quipped.

Murphy apologized for that type of material years ago and has no plans to revisit it with his upcoming return to stand-up comedy.

"There was a time when I was at the center of everything, what I was doing, and how funny I was and how popular," Murphy said. "I'm not at the center. Now my kids are and everything revolves around them." 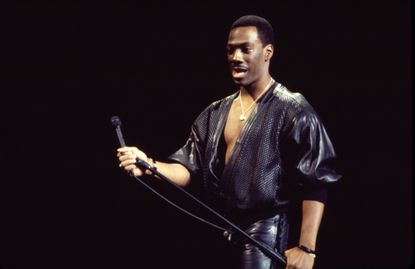 The “Saturday Night Live” legend is scheduled to host the Emmy Award winning sketch comedy series that launched his career on Dec. 21 — for the first time since 1984.

In the interview, Murphy was asked about the recent drama with Shane Gillis, the comedian who was recently hired, then fired after old offensive jokes about Asian people resurfaced online.

“I went through all that stuff, so this is not scary,” he said of controversies over jokes, noting how he apologized for making “ignorant” AIDS jokes. “All this stuff they are talking about: ‘Hey, welcome to the club.’”

In 1996, he owned up to the explicit homophobic stand-up material, which includes the use of gay slurs and jokes about AIDS: “I deeply regret any pain all this has caused,” the Grammy Award winner said in a statement at the time, adding that he was “misinformed” about AIDS. “Just like the rest of the world, I am more educated about AIDS in 1996 than I was in 1981. I think it is unfair to take the words of a misinformed 21-year-old and apply them to an informed 35-year-old man. I know how serious an issue AIDS is the world over. I know that AIDS isn’t funny. It’s 1996 and I’m a lot smarter about AIDS now.”

Luckily for him, his career didn’t end. These days he describes himself as a completely different person.

This season, he’s busy on the comeback trail.

Next year, he will reprise his role as Prince Akeem in the upcoming “Coming to America” sequel, which will feature Arsenio Hall, James Earl Jones, Shari Headley, Wesley Snipes, Tracy Morgan, Leslie Jones and Kiki Layne.

“I hadn’t been back to ‘SNL.’ Let’s fix that. Let’s do stand-up again. That way, when I finally just sit on the couch, then it’s good.”