We’ve all had our fair share of bad quiz grades in the past, but 2PM‘s Oh Taecyeon may have just had one of the funniest failures of all time: he got 30% of the questions wrong on an exam about himself!

Over the past few days, K-Pop fans on social media have been passing the time by making quizzes featuring fun facts about various idols. One fan of 2PM decided to make a “Taecyeon Exam” on Google Forms, but they probably never expected that Taecyeon himself would actually take the quiz.

But the most shocking part wasn’t Taecyeon engaging in a little fan fun—it was that he answered several questions about his own life wrong. To be fair, his 14/20 grade would be considered a passing mark in most schools, but given the subject matter, anything less than 100% is surprising.

It seems Taecyeon himself was just as surprised, because he uploaded a certification video of his answers on Twitter with the hilarious caption, “uhm… i think i am not me… [sic].” Want to know where he went wrong? Follow along with the quiz—and Taecyeon’s answers—below. 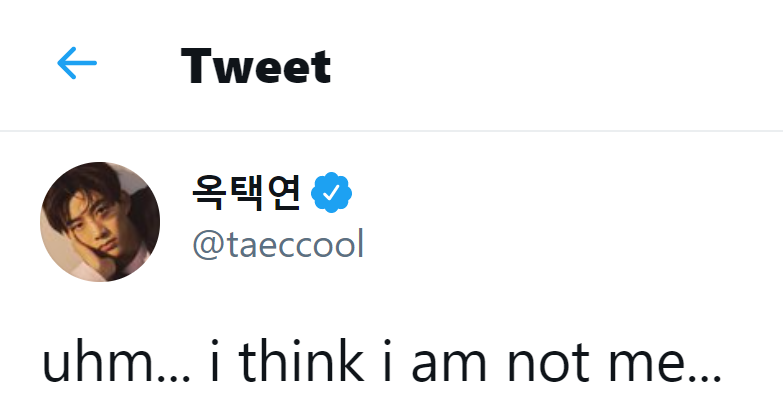 The first question asked where Taecyeon was born, and the 2PM star answered correctly: Seoul. Though he once lived in Busan, he was born in the country’s capital back on December 27, 1988.

Next, the quiz asked about Taecyeon’s siblings. It would be hard for him to forget his older sister, Ok Jihyen, so he answered this question right too.

At the age of 10, Taecyeon and his family emigrated to Massachusetts in the United States. Question 3 asked which city he moved to, and Taecyeon correctly answered Bedford.

Then, the difficulty set in. Around ten years ago, a recording surfaced of Taecyeon reading his old school report. The question asked which historical event he wrote about, and Taecyeon answered “the fall of the Roman Empire”—however, the right answer was “the fall of Carthage.”

Taecyeon managed to regain his success on a question about his original JYP Entertainment audition. While he debuted as an idol, Taecyeon correctly remembered that he originally auditioned as a model.

Did you know that Taecyeon once got in trouble at JYP Entertainment? Apparently, it was a moment he couldn’t forget because he got this question right. Taecyeon had just finished a modeling job in Argentina, but instead of returning straight to South Korea, he snuck back home to Massachusetts. Taecyeon’s punishment was to spend a night in the freezing company basement with Seulong.

Taecyeon grew up in South Korea and the United States, but what’s his actual nationality? The answer is Korean, and unsurprisingly Taecyeon got this question right.

Taecyeon wasn’t so lucky on Question 8, which asked him to choose which nickname he hasn’t been given. He thought the answer was “Rich Teeth,” but it turns out he’s actually never been called “The Nation’s Boyfriend.” To be fair, we find that hard to believe too!

Taecyeon’s first K-Drama role was in the 2010 KBS show Cinderella’s Sister. Taecyeon was able to accurately recall his character’s name from 11 years ago: Han Jung Woo.

Taecyeon is often jokingly referred to as a “fashion terrorist” because of his wacky outfits. He must take his role seriously, because he was able to accurately remember the one outfit he hasn’t worn: a backwards baseball cap with a leopard print sweater, ripped jeans, and Nike shoes.

Whether for better or worse, Taecyeon couldn’t forget the arrangement of the dorm he shared with Jun K in 2010: a bunk bed, on which Taecyeon slept on the bottom bunk.

Given his extensive acting experience, Taecyeon could be forgiven for forgetting a few of his former costars. However, he correctly answered that Nam Ji Hyun is one of the actresses he hasn’t worked with during his career (yet).

Can anyone forget how they got their scars? Taecyeon has an arm on his scar, and Question 13 asked all about its history. He got the right answer when he revealed that the scar came from arm wrestling with Junho, despite J.Y. Park blaming Chansung.

There was once a rumor that Taecyeon used to lurk on 2ONEDAY, an old international forum for fans of 2PM and 2AM. This question asked what his rumored username was, but Taecyeon wasn’t able to guess the correct answer: Bert. Either this rumor isn’t true, or he’s trying to throw fans off the scent!

For many years, Korean netizens were abuzz with rumors that Taecyeon could be dating Girls’ Generation’s Yoona. They danced to “Night Fever” together, starred in a water park commercial together, and Yoona was even thrown into a lake by Taecyeon. However, they never had couple items—Taecyeon got this question right.

One of Taecyeon’s most surprising wrong answers on this quiz regarded the surgeries he once had in order to pass military health checks and enlist as an active-duty soldier. Taecyeon answered that he had surgery to correct a dislocated soldier, but it seems he forgot he also underwent LASIK eye surgery and had pins removed from his arm after his arm wrestling incident.

That said, one thing Taecyeon did remember about his enlistment was how he spent it. According to Taecyeon and this quiz, he was never posted at the DMZ (the demilitarized zone between North and South Korea).

Just as Taecyeon was able to remember his female acting partners, he remembered his male costars too. The idol-actor has starred alongside Chun Jung Myung, Kim Soo Hyun, and Jung Jae Young.

Question 19 asked Taecyeon which English word he blurted out at least once in public. Taecyeon seemed convinced the answer was “CHEESE?!”, but it seems he forgot he once yelled, “SHEEP?!”

Finally, the quizmaster wanted fans to remember which four languages Taecyeon learned to say “I love you” in back in 2009. The correct answer was “Korean, English, Chinese, Spanish,” but Taecyeon answered “Korean, English, Japanese, French.” Perhaps he’s learned “ai shiteru” and “je t’aime” since then!

uhm… i think i am not me… pic.twitter.com/ivSjXLJ19d

Hottest—could you pass this exam with flying colors?