Two women charged with splashing paint over the Black Lives Matter mural in front of Manhattan’s Trump Tower were identified Sunday as attention-seeking anti-abortion protesters who have pulled similar stunts before.

Bevelyn Beatty, 29, and Edmee Chavannes, 39, who live together on Staten Island, were arrested Saturday after they allegedly started to smear black paint over the bright yellow lettering of the mural on Fifth Ave. in Midtown.

“Refund the police,” the two women shouted as they splashed the paint. “Jesus matters! We will never support Black Lives Matter!”

Both women were charged with criminal mischief and released pending a future court date.

“We are taking our country back NOW!” a statement posted on the Facebook page of their At The Well Ministries reads. 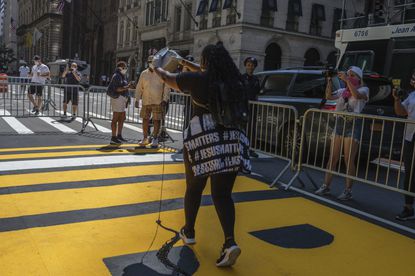 In the statement they claim to have been treated like “royalty” by cops after their arrest.

“The police expressed their HIGH APPRECIATION for what Bevelyn and Edmee stood up for today,” the statement says. “They expressed their concerns and fears for their city. They are in fear for the sake of NYC and voiced that they need MORE people like them to help and stand up for what is RIGHT!”

A cop responding to their vandalism slipped and fell in the wet paint — loudly thumping his shoulder and head on the pavement, video of the incident shows.

“The police officer that slipped and fell in the paint is doing OKAY,” the statement on their Facebook page reads. “He had a hard fall but is doing very well and fine.”

Beatty went on to deface two more murals Saturday night into Sunday morning — one on Seventh Ave. and West 125th St, in Harlem, the other on Fulton St. in Bedford-Stuyvesant in Brooklyn — and posted videos of both to her Facebook page.

“Y’all, we did an all-nighter. Let me tell you something. Yesterday was epic,” she said in a Facebook video posted Sunday, adding that President Trump “needs the American people behind him.”

Police were still investigating the later incidents, and have made no arrests, an NYPD spokesman said.

The women disagree with Black Lives Matter because the racial justice protesters do not necessarily oppose abortion.

They were also charged with disorderly conduct when they disrupted a council meeting in a suburb of Fort Myers, Fla.

The duo also took an unwelcome trip to Kentucky to attend a Easter Sunday service held in defiance of the governor’s April coronavirus stay-at-home order. Similar murals have been painted in Washington and in Bedford-Stuyvesant, Brooklyn.