The woman in white who appeared in the darkness outside a Queens church was a vandal, not a vision.

Security camera footage from the St. John Majella Catholic Church in Hollis shows the pious-looking assailant inflicting at least $12,000 in damages during a pair of nocturnal visits this month, damaging two of the property’s signs, vandalizing the church’s sprinkler system and trashing the parish rosary stations crafted and imported from Italy.

“These are hurtful attacks against the image of Mary and the parish,” said the Rev. Joseph Jude Gannon, pastor of the Queens house of worship. "Such acts of religious intolerance have no place within our society, and every house of worship, regardless of their beliefs, should be respected.

“We are praying for the person and for justice.”

The woman arrives like a spectral presence in the first video, wearing a knee-length, hooded, white jacket. She waits for a vehicle to drive away before using a tool to tear down two signs on the fence surrounding the church parking lot.

She also ripped down all the church’s potted plants, Gannon said.

In the second video, she appears to carry a knapsack over her shoulder at she heads toward the Italian rosary stations purchased by the parish. Over the course of roughly 45 minutes, the woman took all 20 and threw them into the garbage, breaking some, Gannon said.

The first incident occurred on the evening of Sept. 8, followed by the second attack one week later. The video was given to police at the 103rd Precinct.

Neither security video offers a good look at her face.

But Gannon said she moved calmly and methodically, armed with tools and pliers she used to attack church property, even it’s outdoor sprinkler system.

She also took a break during one of her nighttime raids, brazenly sitting on a church bench for a 10-minute rest, he said. 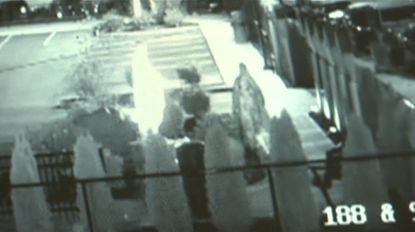