A bull-headed Texas man brought his version of the rodeo to the Financial District on Saturday. 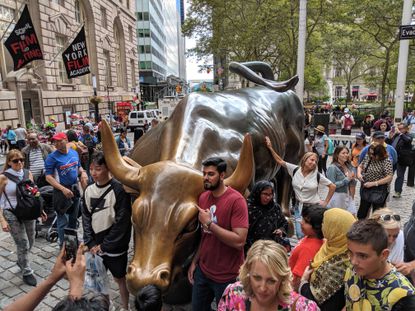 Tevon Varlack of Dallas went wild on Broadway’s famous Charging Bull statue, bashing the bronze beast so hard he damaged one of its horns.

“F--k Donald Trump,” Varlack, 42, screeched over and over during the beatdown, said a homeless man who saw the scene unfold on Broadway near Morris St. around 12:30 p.m.

Varlack used a metal object of some sort to beat the bull’s horn — one witness said it looked like a silver guitar.

“Why attack the bull?” wondered the homeless witness, who did not want to reveal his name.

Cops said the answer to that question was not immediately clear — and Varlack didn’t offer an answer when he was walked out of the First Precinct on Saturday night.

“We’ll talk about that later,” he said.

Asked what he thought of Trump, Varlack said: “He’s cool. He’s the president.”

Tourists taking snapshots of the 7,100 pound bull symbolizing wall Street strength, created by Sicilian artist Arturo Di Modica and installed in 1989, had no sympathy for Varlack.

“It’s selfish,” said Ryan Taylor, 28. ”There are more impactful ways to say what you need to say.”