The bizarre details from suspect Samantha Shader’s sit-down with cops after her May 29 arrest at a Brooklyn march emerged Saturday in a new 11-page federal complaint charging her pal Timothy Amerman with supplying Shader with bottles for the bomb.

Amerman, 29, of Saugerties, N.Y., admitted in a Facebook post that he “kitted up” Shader with glass bottles, paint and a hammer to throw at Brooklyn cops and counter-protesters, the complaint said.

He also left Shader, 27, a handwritten note of encouragement before she headed to New York City to protest police brutality after the death of George Floyd beneath a Minneapolis cop’s knee.

“I found a few more glass bottles than I thought I had, though still not many,” wrote Amerman, according to court papers. “BE SAFE. Please. Really. Good luck, love Tim.”

Amerman’s and Shader’s fingerprints were recovered on the note, authorities said.

Shader remains in custody at Brooklyn’s Metropolitan Detention Center, charged with attempting to use improvised incendiary devices after she was caught on video throwing a gasoline-filled bottle at the car occupied by four NYPD officers.

Amerman, in interviews with law enforcement on Thursday and Friday, acknowledged his fondness for Bulleit bourbon — a small-batch Kentucky whiskey.

Authorities had previously received “a glass Bulleit bourbon whiskey bottle that (a) witness saw Samantha Shader use as a vessel for the Molotov cocktail that she threw at the NYPD vehicle,” the complaint charged. “Amerman told a law enforcement officer that Bulleit bourbon is his bourbon of choice.”

A judge in Albany Federal Court ordered Amerman pending another court appearance Monday as authorities seek his return to Brooklyn.

Police grabbed Shader, of Catskill, N.Y., after she was caught on videotape while flinging the Molotov cocktail at a police car at the corner of Eastern Parkway and Washington Ave. in Crown Heights.

Samantha Shader told federal investigators the makeshift bomb was handed to her by a “thicker” Black man “with skinny dreads” of different colors, as well as a second Black man and a Black woman, according to court papers. 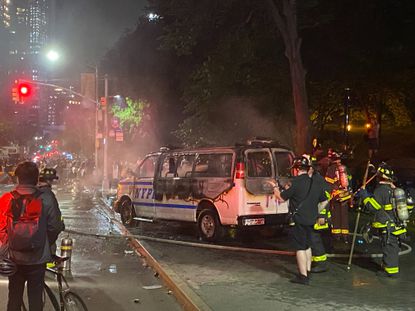 The Black man told her they intended to “prove a point” with the homemade bomb, Shader said. She told investigators she didn’t know the trio but “felt important at the time she took the bottle because she was the only white person in the area,” court papers say.

But the recovered note from Amerman told a different story — and authorities found a Facebook post from the Saugerties-based painter that declared “black people have every right to burn down a country they built for free.”

The complaint said Shader admitted to authorities that she posted the same message on Facebook.

Amerman, in a separate Facebook exchange, said he was initially asked to join in the Brooklyn demonstrations.

“I was invited to go for a ride to NYC to get saucey, and I’m contemplating it,” he wrote. Asked if he went, Amerman replied: “Nope. But I kitted out some others.”

Amerman told authorities that Shader asked him to join her and her sister in New York City and “cause some hell,” but he declined, opting to go to work. He left them with the bag of materials instead, according to court documents.

If convicted, Timothy Amerman faces up to 10 years in prison.

“I don’t really know too much,” said Amerman’s older sister, Shannon Stewart, when reached by phone. “I’m a little worried.”

Samantha Shader’s sister, Darien Shader, was charged in Brooklyn Criminal Court with trying to stop authorities from arresting her sibling.

Samantha Shader’s criminal record indicates she has traveled the country committing various crimes since 2011, including acts of violence and resisting arrest.

She was arrested 11 times in 11 different states, including a March 2013 conviction in Texas for assault causing a bodily injury and an Oklahoma conviction four years later for possession of a controlled substance.