Trump mocks Portland mayor who was gassed by federal ‘troops': ‘they knocked the hell out of him’

President Trump called Portland Mayor Ted Wheeler “pathetic” after the Oregon politician was gassed by federal “troops” while standing among protesters outside a courthouse.

“He made a fool out of himself. He wanted to be among the people, so he went into the crowd and they knocked the hell out of him,” Trump said during a prime-time performance with Sean Hannity on Fox News Thursday. “That was the end of him. So that was pretty pathetic.”

Protesters have been regularly active in Portland since unarmed Black Minnesota man George Floyd was killed in police custody in late May. The president sent federal muscle to confront demonstrators, which Wheeler referred to as “an unconstitutional occupation.”

Federal officers in camouflage fatigues have been apprehending citizens and using unmarked vans in recent days. Protesters have complained about not knowing why they were being detained or who their captors were.

Wheeler, whose role as mayor makes him the commissioner of the Portland Police Bureau, has been taking it from both sides. Some critics fault him for restraining law enforcement. Other politicians blame him for what they believe to be strong-arm tactics by Portland’s police force. Wheeler told protesters Wednesday he was literally and figuratively standing beside them as he was tear-gassed.

“It stings. It’s hard to breathe. I can tell you with 100% honesty I saw nothing that provoked this response,” Wheeler told the New York Times of the incident early Thursday. “I’m not afraid but I am pissed off.” 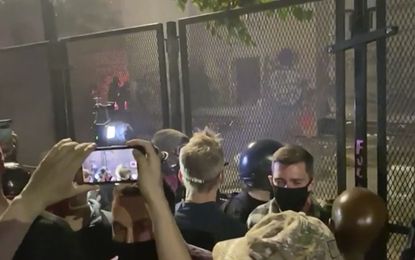 During his video chat on “Hannity,” the president said “we want to go in and help the cities” where peaceful protests as well as violence and vandalism have occurred.

The president noted that he would like for the politicians who run cities like Chicago and Detroit to ask for his help, but warned, “At some point we’re going to have to do something that’s much stronger than being invited in.”

Trump also boasted to Hannity about how well he had been doing as president before the pandemic spun out of control, the economy crashed and protests erupted from coast to coast.

Hannity praised the president for his work with the African-American community and claimed Joe Biden, Trump’s presumptive opponent in the November election, is “adopting the position that police are the enemies.”