President Trump claimed Monday that he was merely raising the issue of corruption when he urged Ukraine’s president to investigate Joe Biden and his son.

Trump is facing spiraling pressure over claims that he used a July 25 call to bully Ukraine President Volodmyr Zelensky into launching a new probe aimed at tarnishing Joe Biden’s reputation ahead of the 2020 election.

Using presidential foreign policy power as ammunition for a domestic political battle would be a serious abuse of power.

Democrats are demanding access to a whistleblower complaint about Trump’s call as well as a transcript of Trump’s call. The controversy has led to renewed talk from Democrats about whether to launch impeachment proceedings.

Trump has countered by attacking his attackers.

"We had a perfect phone call with the president of Ukraine," he said. "It’s just a Democrat witch hunt, here we go again." 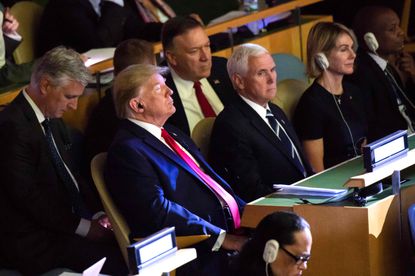 “The one who’s got the problem is Biden,” he added.