An 81-year-old man living in a Midtown senior-living facility nearly knifed a man to death in the building’s elevator, police said Friday.

Cops charged Arthur Strawder with assault and weapons possession for allegedly stabbing a 58-year-old resident inside the Woodstock Hotel on W. 43rd St. near Sixth Ave. just before midnight Thursday.

Strawder stabbed the younger man six times in the stomach, arms and head, cops said. Medics rushed the victim to Bellevue Hospital, where he was in serious condition but expected to survive.

The elderly resident and his victim had been rivals for some time, a police source said.

“It was a a long standing beef,” the source said. “The perpetrator stabbed the victim repeatedly on the elevator. There was blood everywhere.”

Residents quickly identified Strawder as the attacker and cops nabbed him near the scene.

Another resident said Stawder often blew his stack, and wasn’t surprised by the violence. 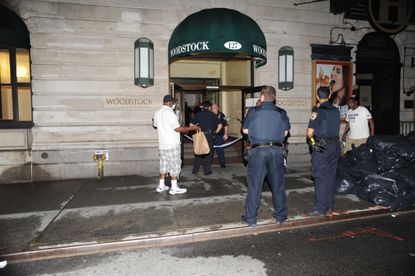 “He’s the type of person that’ll lash out on you if you say something wrong,” he said, declining to give his name. “He’s really old school. He’s not really politically correct.”

But Strawder had friends in the shelter, he added: “He spent a lot of time in and out of jail. More friends than enemies though,” the resident said.

Strawder was also charged with tampering with physical evidence, although it was not immediately clear what that evidence was.

“How do you get to this stage of your life and you’re still screwing up?” asked one resident. “You gotta learn to put your tail between your legs and walk away.”

A spokesman for the hotel said the stabbing “is a shocking anomaly under our management, which began in the 1970s.”

“Project FIND is deeply concerned for all parties involved and is working cooperatively with NYPD’s investigation,” said Mark Jennings, associate executive director for the hotel.